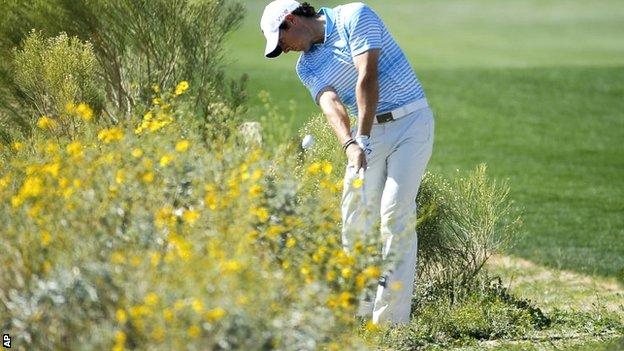 World number seven Rory McIlroy was beaten at the 19th hole by American Harris English in round two of the WGC World Match Play in Arizona.

McIlroy won three holes on the trot to lead by one, but a six at the first extra hole handed victory to English.

US Open champion Justin Rose,the final Englishman left in the event, lost at the 20th hole to veteran Ernie Els.

McIlroy, runner-up in 2012, played some sparkling iron shots in the closing stages against 24-year-old English, who comprehensively beat Lee Westwood 5&3 on day one.

When McIlroy's tee shot at the par-three 16th rolled to within four feet for a birdie he seemed certain to progress into round three but English holed a downhill birdie putt at the 17th.

At the first extra hole McIlroy found thick rough with his tee shot and a similarly hazardous spot for his third, as English calmly recorded a par four.

"It was just unfortunate," McIlroy lamented. "I played pretty well for the most part. But he played really solid and didn't really do much wrong, didn't really give me anything. So the more consistent player won."

Four-time major winner Els, 44, was two up after four against Rose but found himself one behind as they left the 16th green.

I was hoping to not expend as much emotion but that didn't happen. It was another emotional day but I guess I am just happy to still be standing

However, Rose bogeyed the 17th and at the second extra hole took two shots to escape from a greenside bunker, with Els chipping from a precarious spot on the edge of the trap to set up a winning birdie.

Stenson, who in November became the first man to win the European Tour's Race to Dubai and US PGA's FedEx Cup in the same season, failed to recover after going three down after four holes to Oosthuizen, who had an eagle and four birdies in the match.

Northern Ireland's former US Open champion Graeme McDowell, who came from three down with three to play to beat Gary Woodland in round one, produced another fine comeback to defeat Hideki Matsuyama on the final green.

World number 22 Matsuyama, who had seven birdies in his 3&2 first-round victory over former world number one Martin Kaymer, won the first two holes against McDowell with a birdie and an eagle.

The lead was still two after the 14th but McDowell holed impressive birdie putts to win the 15th and 17th and level the match, before winning at the last with a par.

"I was hoping to not expend as much emotion but that didn't happen," said McDowell.

"It was another emotional day but I guess I am just happy to still be standing."

This year's event is missing three of the world's top four players in Tiger Woods, Adam Scott and Phil Mickelson.

Players are divided into four groups, with the group winners in the knockout format going through to contest the semi-finals on Sunday.