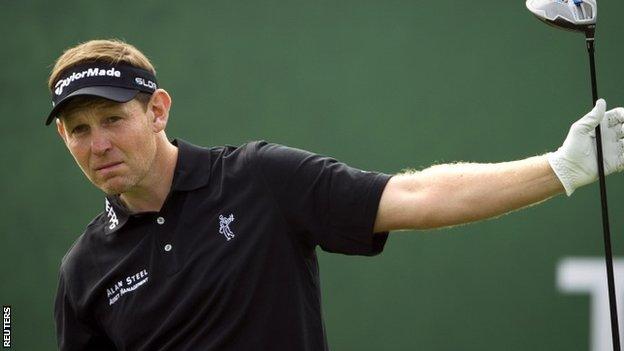 Stephen Gallacher recovered from a poor front nine to retain his Dubai Desert Classic ahead of Emiliano Grillo.

Gallacher, 39, entered the final day with a two-shot lead over Rory McIlroy but hit four bogeys in his first nine holes to fall away from the lead.

But four birdies on the back nine saw the Scot move back to the top and a round of 72 saw him finish on 16 under.

Grillo ended one off the lead after a 66, while McIlroy shot a 74 to finish four shots back.

"The key thing is that this win takes Gallacher to around the world's top 40 which means he will be eligible for all the biggest events, starting with the WGC Matchplay then Doral and the Masters.

"That gives him the ideal platform to launch his bid for Ryder Cup qualification."

World number one Tiger Woods carded a final round of 71 to finish in a tie for 41st on six under.

"It took everything I had after the start," Gallacher told Sky Sports. "It was the plague of the front nine again.

"I was quite fortunate that nobody was running away with it so I just tried to hit one shot at a time and stay in it.

"When I holed a nice putt on 11, I thought I was back in with a chance and then I had three birdies from there in."

The win - which will earn Gallacher over £250,000 as well as a place at The Masters for the first time - will move the Scot into the top 40 of the world rankings for the first time, and he could yet make the team for this year's Ryder Cup.

The top four players on the European points list, and the next five on the world points list, will earn automatic selection for Paul McGinley's Europe team.

Gallacher was 29th on the world points list before the Desert Classic but only 46 points behind Dutchman Joost Luiten, who holds the final automatic place.