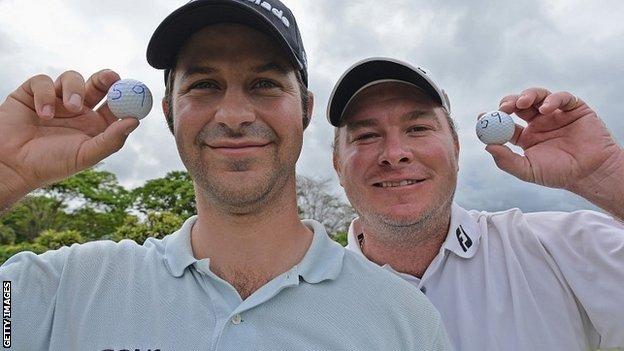 Spain's Jorge Campillo and South African Colin Nel both shot 59 in the rain-hit Nelson Mandela Championship but they will not count as the lowest scores in European Tour history.

The policy of "preferred lies" was in place, allowing players to lift and clean their balls on the damp fairways.

Par had also been reduced to 70 in the event shortened to 54 holes.

England's Daniel Brooks led at 12 under after 10 holes of his second round before play was called off.

Rounds of 59 on PGA Tour

The tournament, hampered by heavy rain on Thursday, will finish on Saturday after the final round was brought forward by 24 hours to avoid a clash with the funeral of former South African president Nelson Mandela on Sunday.

Campillo and Englishman Matthew Baldwin (62) were one shot adrift of Brooks with South African trio Oliver Bekker and Branden Grace, who have both completed their second rounds, and Dawie van der Walt who has five holes still to play, on further back.

"My caddie walked the course during the practice round and said we could shoot 59 out here," said Campillo, who fired two eagles and seven birdies.

"It's a great day. I was nervous on the finish, but I managed to finish strong. I'm really happy because no matter what you still have to make the putts to shoot 59."

Nel had an eagle and nine birdies to move up to a share of 27th on four under.

"I was a bit depressed after my first round," Nel said. "So on the first tee I said to my playing partners, 'Where's the first tee and what's the course record?' I needed to go deep to make the cut. The putter just got hot. I had 22 putts, 11 (on) each nine, and you dream of that."