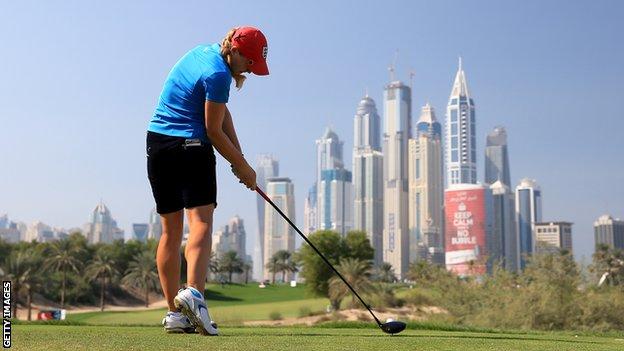 Northamptonshire's Charley Hull will divide her time between the Europe and USA in 2014 after a successful debut professional season.

Hull, 17, took the Ladies European Tour Rookie of the Year award by holding off England's Holly Clyburn, 22, at the season-ending Dubai Ladies Masters, where she tied for eighth place.

"I didn't go to LPGA Qualifying School, but I've got six or seven invites.

"It'll be half and half on each Tour. I don't want to go straight to America."

She continued: "I'm already in a few of the majors, but I don't want to ruin my childhood - I still want to see my mates."

Hull and Clyburn finished sixth and seventh respectively, with the title claimed by Norway's Suzann Pettersen, 32, who won 518,448 euros.

The 17-year-old also shone in Europe's Solheim Cup triumph over the USA in Colorado, beating 27-year-old Paula Creamer 5&4 in the final days singles.

She has also been nominated for the BBC's Young Sports Personality of the Year award.

"It's been a really good season and to win Rookie of the Year tops it all off," she added.

"It's an honour to be nominated for Young Sports Personality. That event should be a lot of fun.

"Next year, I just want to get that [first tournament] win and then I'll be super happy."