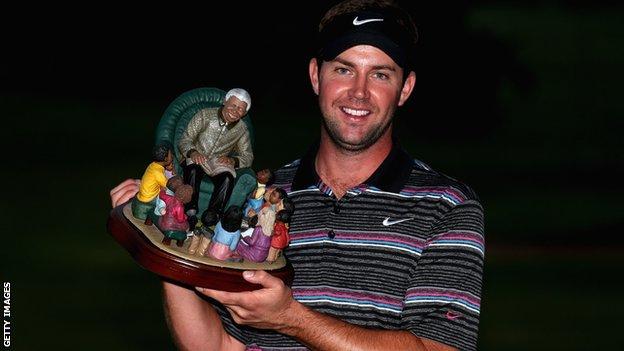 Scott Jamieson says it would be an "incredible honour" to retain his Nelson Mandela Championship title.

The Scot won the inaugural tournament in 2012, but this year's event has added significance after Mandela's death last Thursday.

His funeral is on Sunday, with the tournament starting on Wednesday so it finishes on Saturday.

Off the back of last year, I can only be more confident

"Obviously being so close to his sad passing last week, it definitely adds an edge to the tournament.

"To be able to retain it would be fantastic and certainly would be an incredible honour.

"I think the competition's going to be fierce, especially, I imagine, among a lot of the South Africans. Yes, it's going to be a tough week, but I'm looking forward to the challenge."

The tournament had to be cut to 36 holes because of severe rain and the Glaswegian defeated Spain's Eduardo de la Riva and England's Steve Webster in a play-off.

And, with the 2014 season already into its fourth week, Jamieson is eager to build on that success.

"Off the back of last year, I can only be more confident," he added.

"Every year on tour, I've progressed. Last year, I got to play in two majors and a World Golf Championship event."