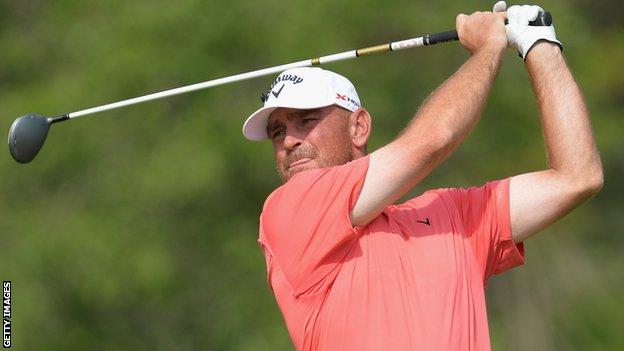 Veteran Dane Thomas Bjorn fired a closing 65 containing two eagles on the back nine to capture a two-stroke win at the Nedbank Challenge in Sun City.

The 42-year-old finished 20 under for his second European Tour victory of the year and 15th in total.

Another win for Thomas Bjorn

Sergio Garcia also shot a 65 and was second with Welshman Jamie Donaldson, who began the final day with a three-shot lead but could only return a 70.

Donaldson, who won the Abu Dhabi Championship in January, began steadily in the 30-man event at the Gary Player Country Club, with four pars before adding birdies at the fifth and seventh.

But he dropped a shot at the ninth and was joined by Garcia, without a win this year, who collected six birdies on his outward half.

However, Bjorn, playing his 424th European Tour event, produced the decisive burst of scoring, with eagles at 10 and 14.

Garcia birdied consecutive holes from the 14th but when he bogeyed the 16th Bjorn's lead was three and the Dane could afford to drop a shot at the last and still win comfortably, his fourth European title since turning 40 in February 2011.

His maiden title in South Africa represents the 11th country in which he has won an official event on the European Tour and it extended his exemption on the tour to 2016.

"Obviously having two eagles on the back nine on a Sunday doesn't happen very often," Bjorn said. "The shot into 14 was a bit fortunate but that's what happens when you win golf tournaments, I guess."

Fans surrounding the 18th waved streams of South African flags in late afternoon sunshine on a day dedicated in the country to prayer and reflection following the death of former President Nelson Mandela.

"To see what one man can do, it's an inspiration to all of us," Bjorn said. "If we all just did a bit more, this world would be a better place."