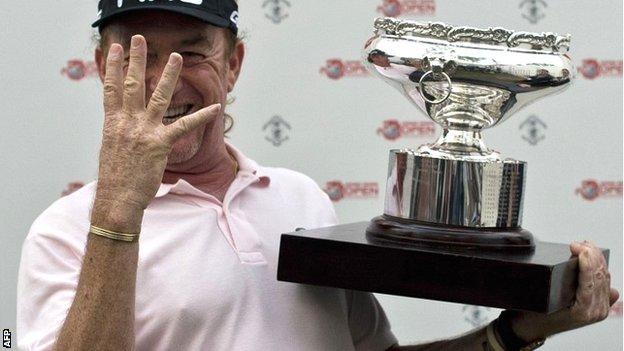 Evergreen Spaniard Miguel Angel Jimenez broke his own record as the European Tour's oldest winner with victory in a play-off at the Hong Kong Open.

Jimenez, who is 50 on 5 January, retained the title that first saw him break the Tour record 12 months ago.

It was his 20th European win and first since breaking a leg skiing last year.

He shot a final-day 66 to tie at 12 under with Welshman Stuart Manley and Prom Meesawat of Thailand, and won with a birdie at the first extra hole.

Jimenez will move back into the world top 40 after a record-equalling fourth Hong Kong Open title, and said he was confident of securing a place in the European Ryder Cup team to face the United States at Gleneagles next year.

"If I play the way I am playing this week I will be in the Ryder Cup team," he vowed. "There is one more year to go and this victory will help a lot. You never know, I would love to be part of the team again."

Should he qualify, Jimenez - who made the most recent of his four appearances in the competition in 2010 - would set another record.

He would become the oldest player to appear in the Ryder Cup, eclipsing Ted Ray who was 50 years, two months and five days old at the inaugural contest in 1927.

Victory at the Hong Kong Golf Club in Fanling was Jimenez's seventh European Tour success on Asian soil, extending another of his landmarks, and the 168th Spanish success on the European Tour.

Going into the final round Manley, seeking his first European Tour title, held a one-stroke advantage over Shiv Kapur and Wade Ormsby, with Jimenez two shots off the lead and Meesawat one further back.

Burly 29-year-old Meesawat, also yet to win on the European Tour, was three ahead at one point and set the clubhouse target with a 65 containing two eagles.

After three birdies in four holes from the 11th, Jimenez, playing in his 618th European Tour event, dropped his only shot of the round at the 15th, but birdied the 17th and then saved par from a greenside bunker on the last to match Meesawat at 12 under.

Manley, 34, had an eventful start to his final round, mixing four birdies and four bogeys in his opening 10 holes, but his chance appeared to have gone when he missed a good birdie opportunity on the 17th and remained 11 under.

But the Welshman, who had a hole-in-one followed by an 11 at the World Cup of Golf last month, chipped in from just off the 18th green to make it a three-way play-off.

The players returned to the 18th, where Jimenez gained a length advantage after he was the only player to take a driver off the tee.

Meesawat was short of the putting surface in two and Manley pushed his second from almost 200 yards into a hospitality tent as Jimenez secured victory by holing a slippery downhill putt from 18 feet.

Manley, who thought he had won a car for his ace in Australia only to be told it was only on offer in the final round, reflected: "Obviously I'm disappointed to lose in a play-off with a poor shot, but for Miguel to make birdie is pretty special.

"It was pretty special to make three myself to get into the play-off. So I can take a lot from the week.

"This week will give me a lot of confidence. It's money on the board for The Race to Dubai and everything feels very positive."