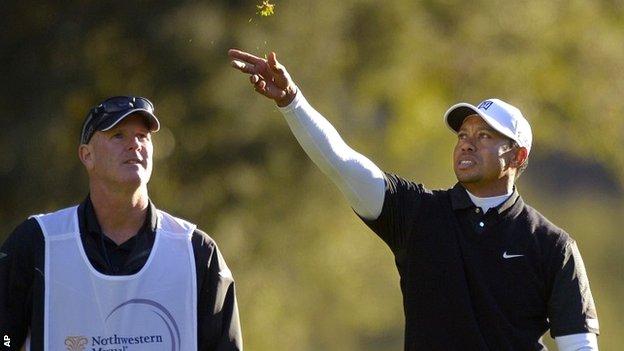 World number one Tiger Woods birdied two of the last three holes to retain his two-shot lead after the third round at the World Challenge in California.

The American made four birdies and four bogeys in a level-par 72 to stay 11 under at the Sherwood Country Club.

Zach Johnson, who holed a 24-foot birdie on the 18th, is second after a 72, while Bubba Watson is up to third, two shots further back, after a 69.

Graeme McDowell is the top European, nine shots off the lead in joint-sixth.

England's Ian Poulter is two shots behind the Northern Irishman on level par while McDowell's countryman Rory McIlroy, who won for the first time in 2013 at the Australian Open last week, shot a 68 - the best round of the day - to reach two over.

The 24-year-old world number six birdied three holes in succession from the 12th and had six birdies in total, with only one blemish, a double bogey at the 15th.

The Players Championship (by two shots)

England's Lee Westwood dropped further out of contention, to seven over in a tie for 14th place in the 18-man tournament.

Woods equalled his own course record with a 62 on Friday, but Saturday's conditions in Thousand Oaks were vastly different, cold and wet in the morning, with a chilly breeze in the afternoon, while difficult pin positions created further difficulties.

"It was a tough day," the 37-year-old said. "The wind was all over the place. It was really tough to pull clubs, and even though the greens were softer, they were still pretty quick."

The 14-times major winner, seeking his sixth title of the year, three-putted twice in three holes to drop shots on the back nine.

Woods, five times a winner of this event - which is in aid of his Tiger Woods Foundation charity, admitted he was not happy with how he putted, saying: "I left a few out there today."

Two-time runner-up Johnson, the 2007 Masters champion, briefly took a one-stroke lead after a birdie at the ninth, but his challenge was stalled by two-double bogeys at par threes.

He found a plugged lie in a greenside bunker at the 12th and was one of eight players to find the water short of the 15th green, with three players doing so twice.

Woods narrowly missed a 15-foot eagle opportunity at the 16th, but after Johnson holed his long birdie putt at the last, Woods followed him in from 12 feet to maintain his two-stroke cushion into the final day.