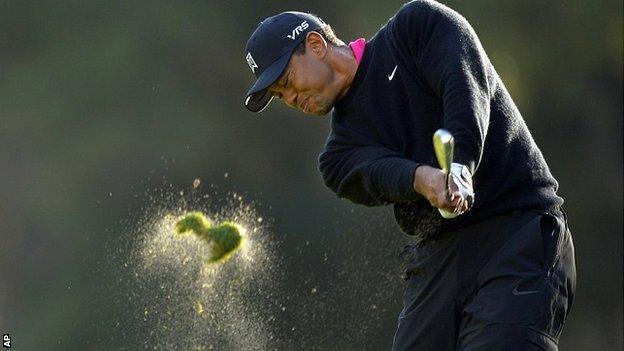 World number one Tiger Woods equalled his own course record with a 10-under-par 62 to take a two-shot lead at the World Challenge in California.

Woods hit 10 birdies in a blemish-free round to finish 11 under overall.

Overnight leader Zach Johnson is in second place after a 68, with fellow American Matt Kuchar a shot further back at the Sherwood Country Club.

Graeme McDowell is six behind after a 67 but Rory McIlroy had a nine in his 77 and is 17 shots adrift at six over.

McIlroy, who captured his first win of 2013 last week at the Australian Open, recorded a double-bogey six at the par-four fourth and ran up three consecutive bogeys from the 12th in a mixed round that also included five birdies.

In contrast Woods, seeking a record sixth victory at the event and his sixth tournament win this year, had a birdie opportunity on every green and never went more than two holes without picking up a shot.

The Players Championship (by two shots)

It was the 10th time he has posted 62 or lower in a tournament and he went on to win six of those events.

His best round is a 61 which he has carded four times, most recently in the second round of the WGC Bridgestone at Firestone in August, where he went on to win by seven strokes.

"It was good today," Woods told reporters after hitting 12 of 13 fairways off the tee. "I certainly hit it good, obviously.

"But I left myself in some good spots most of the day. I had probably only two putts that were downhill, most of them were uphill."

The second round was delayed for an hour by morning frost and Woods said: "I did not warm up well. I was not hitting it very good on the range."

However, he opened with back-to-back birdies, leaving himself a putt of less than two feet at the first.

The 37-year-old claimed it was not until the third hole that he felt comfortable.

"I tried to keep that feeling the rest of the day, and I did," he said. "I hit a lot of good shots after that."

Kuchar, twice a winner on the 2013 PGA Tour, had sympathy for McDowell and said: "I saw he posted a five-under-par round, and it must have felt like it was two or three over. It's tough when you're paired with a guy like Tiger. It makes you feel like you're not doing much. But the rest of us just go about our business.

"To the rest of us, my four-under score is kind of a good barometer. Ten under is an amazing round of golf but I'd certainly take two more rounds of four-under par."

England's Ian Poulter was tied for eighth in the 18-man event after an impressive five-under-par 67 containing no dropped shots took him into the red on one under.

Poulter's compatriot Lee Westwood, was some distance behind, tied for 13th on five over following a 75 in which three strokes slipped by in two holes and he recorded only one birdie.