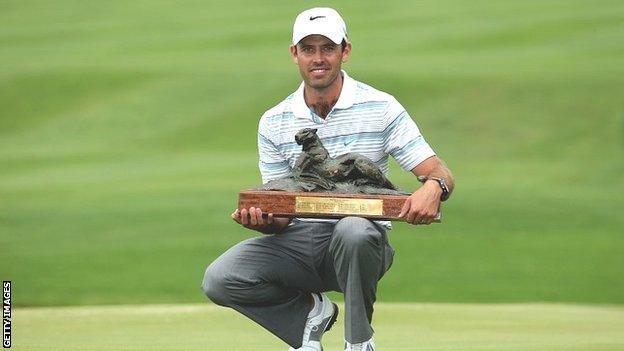 Schwartzel, 29, led Finch by two going into the final day and shot 68 to end 17 under in Malelane, South Africa.

Schwartzel, who let slip a three-shot lead to finish fourth in the final round of last week's European Tour opener, the South African Open, saw Finch erase his lead with two birdies in the first three holes on Sunday.

But Schwartzel hit back with three birdies of his own against two more from Finch to lead by one again at the turn.

And the Englishman slid further back with a bogey on the 11th and a double bogey on the par-four 14th as Schwartzel birdied the 13th.

Finch, who was playing on a sponsor's invite after losing his Tour card at the end of the 2013 season, grabbed a shot back at the 15th, but five straight pars to finish handed world number 21 Schwartzel his ninth European Tour win and third Dunhill title after a 2004 play-off victory.

"I had a bit of a hiccup during my first round at the 17th but after that I played almost flawless golf with no bogeys," said Schwartzel, a native of Johannesburg.

"If you play some 60 holes without making a bogey, then hopefully you're going to win."

Fisher birdied the last alongside Dyson, who faces a European Tour disciplinary panel on Thursday following his disqualification from the BMW Masters in October.