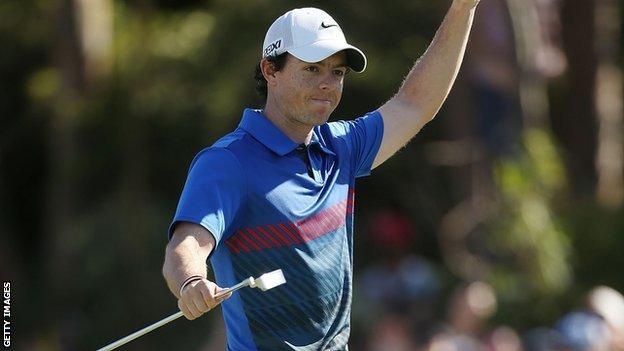 Rory McIlroy insisted he had put off-course distractions behind him as he celebrated a thrilling one-shot win over Adam Scott at the Australian Open.

Scott led by four shots going into the final day, but Northern Irishman McIlroy birdied the last for a 66 to clinch his first win of 2013.

"Since the end of September, I have just felt in a better place mentally," said world number six McIlroy.

"Everything has been coming together the way I wanted."

There have been massive distractions for McIlroy this year, he fell out with his management company, there was the change of golf clubs, he made a mess of his schedule and didn't play enough early on. In Miami he walked off the golf course when he was destined to miss the cut, that was a low point, and he talked about being 'brain dead' when he missed the cut at The Open.

Bit by bit things are being sorted out, the golf game is obviously coming round and he is starting to play with the confidence that made him the best golfer in the world. The competition is as stiff as ever but an in-form Rory McIlroy is certainly capable of winning majors.

McIlroy, who won five times around the world in 2012, including a second major when he won the US PGA Championship, admitted 2013 had been a frustrating year "with some things off the course".

Such well-publicised distractions for the former world number one included falling out with his management company, as part of a massive sponsorship deal, and rumours that he and tennis-player girlfriend Caroline Wozniacki had broken up.

Overnight leader Scott, the world number two, started and finished with bogeys as he carded a 71, letting slip the chance to complete the triple crown of Australian golf - the Australian Masters, PGA and Open in the same season.

"I cannot believe I have won," said 24-year-old McIlroy. "I did not think it would unfold the way it did.

"On the 18th, I thought I might have the chance of a play-off. Then, all of a sudden, I had a putt to win and didn't want extra holes.

"For that last putt, I just focused on my normal routine and didn't think about it being my first win of the year.

"I thought I had blown my chance on 16, putting my second shot in the bunker and not making a birdie.

"Then at 17 Scotty was close to making a birdie but didn't.

"I just stayed patient because I knew anything could happen on this course.

"Adam put it in a tricky spot on 18 and luckily I was able to make that putt when I needed it.

"It has been a frustrating year, but I have worked hard. It has been a process, getting back to winning golf tournaments again."