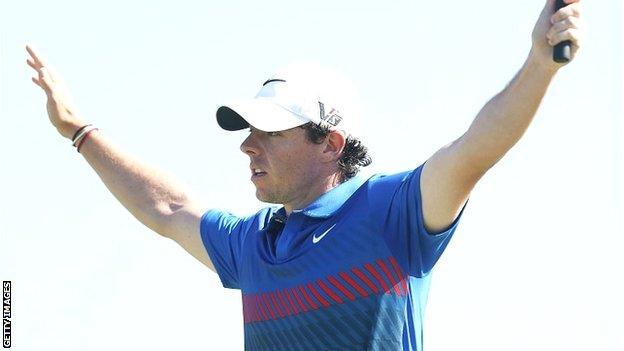 World number six Rory McIlroy birdied the final hole to win his first tournament of 2013 with a dramatic one-shot triumph in the Australian Open.

The Northern Irishman, 24, began the final round who had led all week at Royal Sydney.

But McIlroy carded a fine 66, with an eagle at the seventh and four birdies in total to win outright on 18 under.

World number two Scott bogeyed the 18th for a 71 to finish on 17 under, six clear of fellow Australian John Senden.

There have been massive distractions for McIlroy this year, he fell out with his management company, there was the change of golf clubs, he made a mess of his schedule and didn't play enough early on. In Miami he walked off the golf course when he was destined to miss the cut, that was a low point, and he talked about being 'brain dead' when he missed the cut at The Open.

Bit by bit things are being sorted out, the golf game is obviously coming round and he is starting to play with the confidence that made him the best golfer in the world. The competition is as stiff as ever but an in-form Rory McIlroy is certainly capable of winning majors.

Scott, who broke the course record with a 62 on the opening day, was seeking to become only the second man, after compatriot Robert Allenby in 1995, to complete the Australian triple crown, having won the Australian PGA and Australian Masters titles last month.

But in an intriguing final day tussle on the par-72 Championship course it was McIlroy who captured his first event since the World Tour Championship in Dubai in November 2012.

Scott three-putted the first green and his four-stroke advantage had been eroded by the eighth after a fine start by 2011 US Open and 2012 US PGA champion McIlroy, who produced some sparkling iron play.

Having missed a birdie chance from four feet at the seventh, Scott's putt from similar distance lipped out at the next and McIlroy was level after holing from six feet.

The Australian, who won the title in 2009, reached the turn one shot ahead after he converted a six-footer for birdie and McIlroy's putt narrowly stayed out.

The final two rounds of the tournament had become something of a matchplay contest between the two biggest stars on show and holes 10 to 12 were parred by both players.

Both had eagle chances at the 13th, Scott's putt shaving the edge of the hole.

Scott had further opportunities to go two ahead, but three-putted from the front of the green at the 16th after McIlroy found a bunker, and then lipped out again at the par three 17th following a superb tee shot.

In addition McIlroy holed a key 10-footer for par at the 17th to ensure that Masters champion Scott was only one ahead with one hole to play.

However, the Australian's approach to the 18th green trickled past the flag and down the steep slope behind the putting surface. His chip back was overhit and raced 40 feet past and the effort for par finished fractionally short.

It gave McIlroy a 10-foot putt for the title and he calmly rolled it into the centre of the cup.

"I wanted to get a win and finally I've been able to get one," said McIlroy, who was facing a first winless year since 2008.

"More satisfying than that is being able to take one of the best players in the world down the stretch and come out on top.

"Adam is a phenomenal golfer, a great competitor and probably an even better guy. I feel a bit sorry that I was the one that ruined the triple crown for him.

"I've been building confidence for a few weeks now. When I went to Asia I started to play really well.

"I've worked hard, I've put the hours in and I've practised hard and finally it's turned around for me."

Scott said: "I'm gutted, I felt I'd never have a better chance to win the Aussie Open.

"I just slightly misjudged a few putts, overplayed the break, missed a lot of putts on the high side and didn't quite have the eye in - and it always gets a lot trickier on the Sunday.

"But I just misjudged on the last and a player as good as Rory is going to take that opportunity."