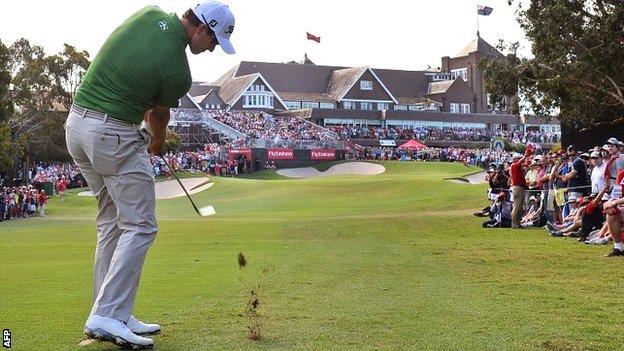 Australian Adam Scott moved a step closer to claiming his country's triple crown as he extended his lead to four strokes with one round remaining at the Australian Open.

The world number two has already won the Australian PGA and Masters titles this month and began the day two shots ahead of Rory McIlroy at Royal Sydney.

Scott birdied three holes in succession and returned a 68 to reach 16 under.

McIlroy recovered from a double bogey to card a 70 and is four behind Scott.

In bright conditions the two leading players both birdied the opening hole on the 6,939-yard par-72 Championship course.

Both dropped shots at the fourth but, as the wind whipped up at the next, McIlroy dropped into the chasing pack after undercooking successive chips from the bottom of a greenside slope and then two-putting for a double bogey.

Scott moved five clear of fellow Australians Matthew Jones and Richard Green in second but drove into the trees and then found sand to bogey the 10th.

World number six McIlroy, yet to win in 2013, responded with three birdies in five holes, his tee shot at the par three 14th clipping the pin and finishing three feet from the hole but Scott also birdied the hole after pitching to a similar distance.

Scott, 33, ensured a four-shot cushion at the last after holing from inside six feet for a birdie, with McIlroy missing his birdie opportunity from closer range.

Scott's round on Saturday means he is now 51 under par for his three tournaments in Australia. He said: "To win my national championship and then also win the three events down here is an unbelievable spot to be in.

"Before this month started, I hadn't ever won two tournaments in a row, so to have this opportunity is a bit unreal."

McIlroy, 24, who has finished in the top six in his last two tournaments, admitted his missed putt on the 18th was costly. He said: "It would have been nice to birdie that to make the gap from four to three.

"I've got a tough job on my hands to try and catch Adam.

"On this golf course there can be a lot of two-shot swings and, if someone makes a couple of pars, and someone gets off to a fast start and makes a birdie and an eagle, you're right back in it."

World number 11 Jason Day, who carded a disappointing 74 on Friday, moved into a share of 10th with a 66, the joint best round of the day.