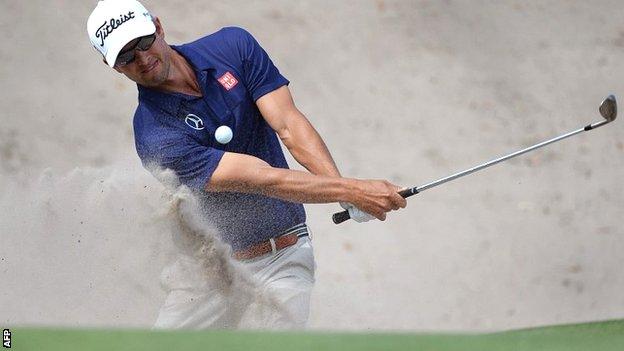 Masters champion Adam Scott fired a course record 62 as Rory McIlroy was hampered by putting troubles in round one of the Australian Open in Sydney.

Scott started with six successive birdies and had 10 in total to beat the record at Royal Sydney by three shots.

He leads by three strokes at 10 under, with American John Young Kim and Canadian Ryan Yip tied for second.

McIlroy shares 16th, seven shots off the lead, after mixing five birdies with two bogeys in his round of 69.

While Scott needed only 24 putts, world number six McIlroy, yet to win a tour event in 2013, took 29 and admitted: "I drove the ball pretty well off the tee but just didn't get any reward on the greens.

"I missed three short ones and that was just wasteful as I felt it could have been a lot lower, given that I am driving the ball the best I feel I ever had.

"It's just a matter of being more efficient and putting better, and that's really it as I only played the par fives in one under par, and the way I am driving it, I should be playing those in four under."

Scott's scorecard had a particularly distinctive look as he began from the 10th with six consecutive birdies and then birdied his final four holes from the sixth to the ninth.

The 33-year-old world number two, whose lowest round is a 61 at the 2008 Qatar Masters, is seeking to become only the second man, after fellow Australian Robert Allenby in 1996, to complete the so-called triple crown of Australian golf, having won the Australian PGA and Australian Masters titles this month.

He hit 15 greens in regulation and such was the quality of his approach play that none of his birdie putts were from more than 16 feet.

Scott finished in fine style with a sand wedge to within four feet at the last.

Remarkably he was not completely satisfied with his game and said: "The swing wanders on a couple of shots and it did it again today. It's not quite in the slot, although I hit a lot of great shots. It's not as free flowing as the first couple of weeks. The swing is a bit of hard work for me at the moment.''

However, McIlroy observed: "When you see someone has shot 10-under par, and especially when it is Adam Scott at the top, I just felt I was standing in neutral gear even though I shot three under.

"It is hard to give Adam Scott a seven-shot lead with three rounds to go."