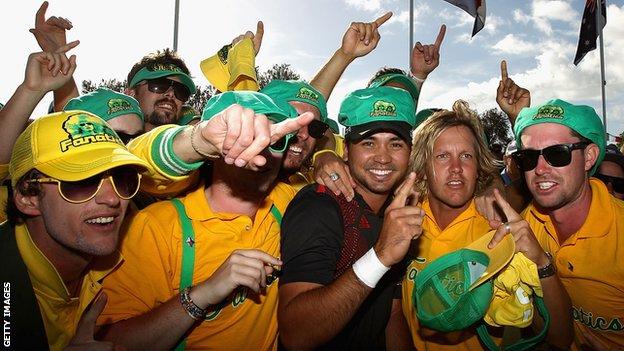 Jason Day took the individual honours as he helped Australia win the World Cup of Golf on home soil.

He carded a one-under-par 70 in his final round for 10 under overall, two shots clear of the Melbourne event's halfway leader, Denmark's Thomas Bjorn.

While Bjorn could only finish with a 71, Day's compatriot Adam Scott (66) eagled the first and birdied the next two as he shot up the leaderboard.

But he could not maintain his lightning start and finished three behind Day.

The home duo's fine week at the Royal Melbourne Golf Club resulted in Australia finishing 10 shots clear of the United States, for whom Matt Kuchar and Kevin Streelman finished at six under and one under respectively.

Bjorn's team-mate Thorbjorn Olesen finished three over as Denmark, who posted an overall score of five under, shared third place in the team standings with Japan.

Day and Bjorn were tied for the lead with three holes to play.

While the Dane dropped a shot at the the par-four 16th, Day managed to save par with a seven-foot putt after finding a bunker.

The 26-year-old Australian safely negotiated the final two holes while Bjorn, needing a birdie at the last to force a play-off, could only record another bogey.

Day's victory was an especially emotional one, given that he discovered last week that eight of his relatives - including his maternal grandmother - had died in Typhoon Haiyan in the Philippines.

His mother, Dening, migrated to Australia from the Philippines 30 years ago.

Dening and her son shared an emotional embrace by the 18th green after Australia sealed their first World Cup victory since Wayne Grady and Peter Fowler won in 1989.

Asked about whether he was going to support the relief efforts in the Philippines, Day said: "Definitely, we'll probably most likely set something up and definitely be giving some money or raising money and trying to raise awareness to what has really happened over there.

"The devastation and the tragedy that's gone on over in the Philippines is very difficult for us to see because we're living in such a great country.

"Once you know of someone or are related to someone who has gone through something like that it's very close to the heart."