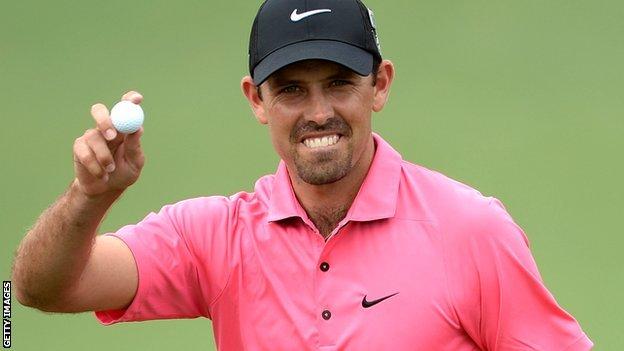 Major winner Charl Schwartzel is considering leaving the European Tour because of controversial new rules governing the end of the season.

The 2011 Masters champion, along with Ernie Els and Sergio Garcia, is ineligible for next week's lucrative DP World Tour Championship in Dubai.

All three have not met the requirement of competing in two of the three events in the lead-up to the tournament.

"I think it does make you think about your future," Schwartzel, 29, said.

Although the South African is playing in the Turkish Airlines Open this week, he missed Shanghai's BMW Masters and HSBC Champions over the past fortnight.

The Race to Dubai

With commitments to the forthcoming World Cup and two events in his homeland, Schwartzel felt playing in China would give him too exhausting a schedule.

"I'm really disappointed and feel sorry for the sponsors next week," he told BBC Sport.

"I really want to play but I think there's been some bad decisions made and unfortunately I can't play. I'm not going to carry on about it but it really needs to be looked at."

The rules are designed to ensure high-quality fields at the first three of the Race to Dubai's Final Series events and not just for the $8m (£4.9m) season-ending tournament, which carries a $3.75m (£2.3m) bonus pool for the top 10 in the standings.

But Schwartzel, ranked 21st in the world, does not believe it is "in the best interests of the Tour".

He has played a full quota of tournaments on the European circuit and is also a member of the PGA Tour in the United States.

"I've played my 13, my three in Europe and supported my home tour. I feel as a South African it's important to support those events, especially co-sanctioned events."

The European Tour is expected to review the rule which has prevented three of its biggest names from competing in the climax to its season-long Race to Dubai.

Schwartzel added: "It will become too difficult to fulfil your commitments all over. I will have to sit back and think what will suit me as a player best.

"I've played in Europe for a very long time and enjoy it and I would love to keep playing. But with these sort of rules coming in, I will have to play some tournaments in South Africa and America only."