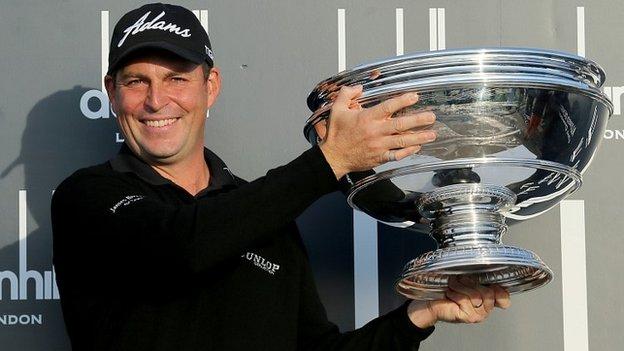 England's David Howell won his first title since 2006 when he beat American Peter Uihlein in a play-off for the Alfred Dunhill Links Championship.

The 38-year-old Howell won with a birdie to Uihlein's par at the second extra hole, the 18th at St Andrews, for his fifth European Tour victory.

Both ended 23 under after Howell shot five-under 67 and Uihlein carded 69.

England's Tom Lewis and Ireland's Shane Lowry were one stroke further back with England's Tommy Fleetwood 21 under.

He was a member of two victorious European Ryder Cup sides in 2004 and 2006 and climbed to a career-high ninth in the world in 2006.

But injury and a loss of form saw Howell plummet outside the top 500 in the world rankings in 2010 before beginning a climb back that will now see him re-enter the world's top 100.

Howell went out in 31, helped by four straight birdies from the fourth, and bounced back from a bogey at the 12th with a birdie at 15 and held his nerve with the title at stake.

"I've never played an Open Championship here and that's still a dream, but to win a tournament here at the home of golf is amazing," Howell told Sky Sports.

"It's been a long, long road back from the depths of despair. I have had a lot of support from people around me and this is as much for them as it is for me."

Howell, whose wife Emily is expecting twins in December, added: "The downs were pretty low and I lost my way in life and on the Tour as well.

"Off-course I was not a happy camper and made some bad decisions around 2008 and took some time to sort through them. I owe Emily a debt of gratitude for having me back and showing me that we were always going to be a happy couple in the end.

"This is a sweet moment to be happy and settled with Emily and Freddie at home and the twins on the way and to win a massive championship seals the deal.

"Hopefully, it can spur me onto bigger and better things."

The 24-year-old Uihlein, who won his maiden European Tour title in Madeira in May, narrowly missed out on the first 59 in European Tour history when he shot 60 in the second round at Kingsbarns and followed it up with 65 on Saturday for a two-shot lead going into the final day.

But, bidding to become the first rookie since Sergio Garcia in 1999 to win twice in the season, he began with a bogey and could only find four birdies around the Old Course.

Two-time Open champion Ernie Els carded a two-over 73 to slip back to a share of 17th at 17 under.

Lewis, who shared the first-round lead as an amateur in the 2011 Open, began the week 155th on the European rankings with only the top 110 in three weeks' time keeping their card for next season.

But a stunning 64 for a share of third place will be enough for the 22-year-old to retain his playing rights.

The pro-am event features rounds at each of St Andrews, Carnoustie and Kingsbarns before the final 18 holes back at St Andrews.