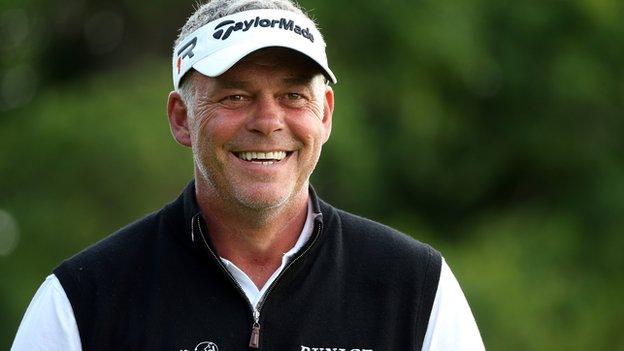 Darren Clarke finished the Dunhill Links Championship strongly at St Andrews as a closing round of 69 saw him end the tournament on 18 under par.

Clarke ended in a tie for 12th position but Michael Hoey was back in joint 26th place as a 73 left him 14 under.

Ireland's Shane Lowry and Tom Lewis of England ended one shot off the lead.

Ex-Irish Open winner Lowry moved into contention courtesy of a course-record equalling 64 at Carnoustie on Saturday but a couple of bogeys on his inward nine on Sunday proved costly.

Lowry had earlier carded four birdies and an eagle two at the 10th as he shot a 68.

Hoey posted two birdies and three bogeys to end any chance of a repeat of his 2011 success.

European Ryder Cup captain Paul McGinley ended on 16 under after a fine 67, with Padraig Harrington 11 under following a 71.

Former Ryder Cup player Howell triumphed at the second extra hole of his play-off with American Uihlein to secure his first European Tour title since 2006.

Gareth Maybin had missed the cut by one shot after his 71 at Carnoustie left him on eight under.