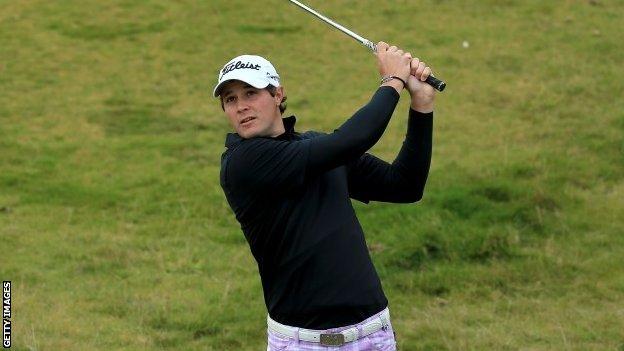 American Peter Uihlein almost carded the first 59 in European Tour history in the second round of the Alfred Dunhill Links Championship.

Uihlein narrowly missed a long eagle putt on his final hole - the par-five ninth at Kingsbarns - and had to settle for a course record-equalling 60.

Uihlein's 12 under par round left him 13 under for the tournament, two shots off the leader, England's Tom Lewis.

Who is Peter Uihlein?

Uihlein will hope to emulate South Africa's Branden Grace, who shot 60 on the same course last year and went on to win the tournament.

"When I made that birdie on the 17th to go 11 under that was the first time 59 crossed my mind," Uihlein added. "I was in the zone out there and it was cool.

"I knew I needed to make an eagle and I thought I hit a good putt. I thought it would come back to the right but it kept going left."

Uihlein's effort was the 17th round of 60 on the European Tour. Earlier this month, his fellow American Jim Furyk shot the sixth 59 on the PGA Tour in the BMW Championship.

Lewis shot 65 at St Andrews to follow his opening 64 at Kingsbarns and reach 15 under par.

He is one shot ahead of Joost Luiten of the Netherlands, with English quartet Tommy Fleetwood, Mark Foster, Oliver Wilson and Richard McEvoy, and South African Hennie Otto, sharing third with Uihlein.

The Alfred Dunhill is a pro-am event in which players alternate between three courses over the first three days, before the top 20 compete at St Andrews on Sunday.