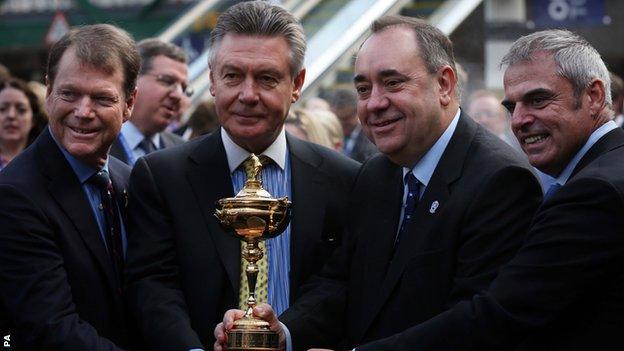 The 2014 Ryder Cup captains have marked a year to go until the event by travelling on a 1927 steam locomotive to Gleneagles.

Paul McGinley, Tom Watson and a host of celebrities headed from Edinburgh to the venue for next year's clash.

Ireland's McGinley said the players were relishing the prospect of starring in the "iconic event".

The match between Europe and United States will be held at Gleneagles from 23 to 28 September next year.

Europe captain McGinley said: "The Ryder Cup is an iconic event in the world's sporting calendar and what better way to kick it off than to arrive into Gleneagles station on an iconic steam train built in 1927, the year of the first Ryder Cup itself?"

I am very grateful for the opportunity to be captain in Scotland, a place that has been very special to me during my career

American Watson said: "I am very grateful for the opportunity to be captain in Scotland, a place that has been very special to me during my career.

"It's hard to believe that it was nearly 20 years ago that I enjoyed one of the most thrilling experiences in my career in being captain in 1993.

"We anticipate a tremendous match and September 2014 can't get here soon enough."

Salmond added: "While there will be many immediate benefits from staging this magnificent sporting occasion, there will also be the long-term effects from this golden legacy, which will ensure the popularity of golf continues to grow and young talent will be nurtured."