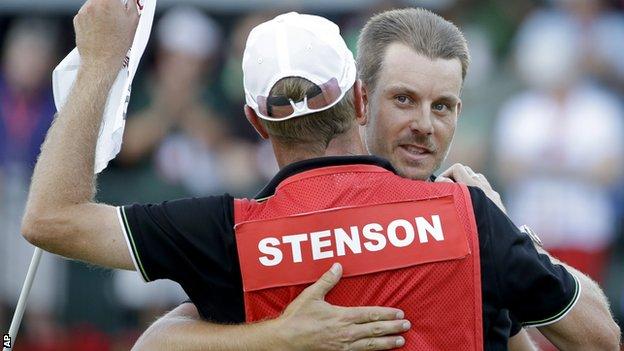 Stenson carded a final round of 68 to win by three shots from United States pair Jordan Spieth and Steve Stricker.

The 37-year-old, who had won £8.1m before arriving in Atlanta, had a four-shot lead ahead of the final round.

But his advantage was reduced to one when 20-year-old Spieth emerged from the chasing pack after sinking four consecutive birdies from the 13th.

He had already carded a hat-trick of birdies from the seventh, while Stenson dropped his first shot of the day on the 14th.

However, Spieth bogeyed the 17th when his approach plugged in a greenside bunker and Stenson holed from seven feet for a crucial birdie on the 15th.

"It was a tough day out there today and I am really satisfied with the way I hung in there," said Stenson.

"I didn't feel that confident with my game today. I had to battle it a little bit. I had to fight hard mentally."

Spieth, who only turned professional in December 2012 before claiming his first PGA Tour title in July as a teenager, carded a closing 64.

Stricker returned a 65 to join Spieth on 10 under, with England's Justin Rose three further shots behind after a final-round 67.

Tiger Woods carded a closing 67 to finish level par for the tournament and in a tie for 22nd place in the 30-man field.

The world number one was among five players - along with Stenson, Adam Scott, Zach Johnson and Matt Kuchar - who knew a win would guarantee them the season-long FedEx Cup.