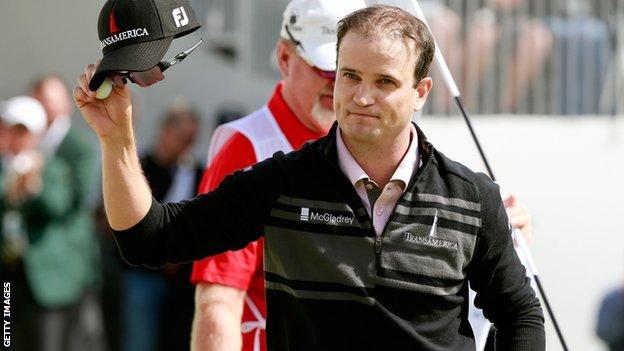 American Zach Johnson shot a final-round 65 to win the BMW Championship and climb into the top five in the race for the season-ending FedEx Cup.

Johnson, on 16 under, finished two ahead of Nick Watney and three better than third-round leader Jim Furyk, with Tiger Woods seven adrift.

Woods and Johnson are amongst the five who can win the $10m (£6.3m) FedEx Cup with victory in Atlanta next weekend.

The Englishman followed his third-round 67 with a 66 in Monday's rain-delayed final round to climb from 54th to 29th in the FedEx Cup standings, with 30 men moving on to the Tour Championship.

Furyk, who became only the sixth player to card a sub-60 round when he fired a second-round 59, has now squandered his last six 54-hole leads.

Woods had begun the day four behind Furyk, but a level-par round of 71 saw him slide down the leaderboard.

The world number one can console himself with the knowledge that he has his FedEx Cup destiny in his own hands.

Along with Johnson, fellow American Matt Kuchar, Sweden's Henrik Stenson and Australian Adam Scott are the players who are not relying on others to falter in Atlanta.

Furyk began the back nine with a two-shot lead over Johnson at Conway Farms in Illinois, but the world number 24's bogey-free round would eventually see him home.

A birdie on the par-four 12th saw Johnson draw level, with Watney's 14 under at one point being good enough for a three-way share of the lead and the lowest score in the clubhouse.

He would drop a shot behind Watney, who also jumped into the field for the Tour Championship.

However, his progress, along with that of Donald, ensured that England's Lee Westwood will miss out.