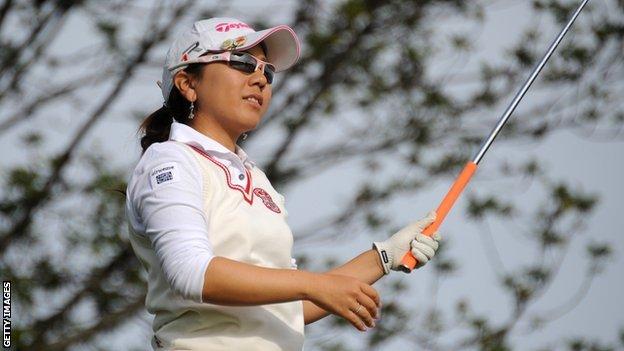 Japan's Mika Miyazato maintained her one-shot lead after the second round of the Evian Championship, the inaugural fifth major of the LPGA season.

Miyazato carded a two-under 69 to leave her eight-under par at the Lake Geneva course in south-east France.

She is a shot clear of Suzann Pettersen and 16-year-old Lydia Ko, with American Stacy Lewis one further back.

The first day's play was washed out and with more rain forecast, officials have reduced the event to 54 holes.

South Korean Inbee Park is three over par in her bid to be the first player to win four majors in the same year.

Miyazato recovered from bogeys at her first two holes to add birdies on the sixth, seventh, 13th and 18th.

Norway's Pettersen, one of the stars of Europe's recent Solheim Cup win in Colorado, carded a 69 and said: "It wasn't a perfect round of golf but I managed to put a score together and give myself a chance for tomorrow.

"I made a few key pars and tried to take advantage of good playing conditions. There were a few tricky pin placements as well so it's not that easy to get a four, five under (round)."

Korean Ko would be the youngest ever winner of a major in men's or women's golf. Her flawless round of 67 featured birdies at the third, fourth, 17th and 18th.