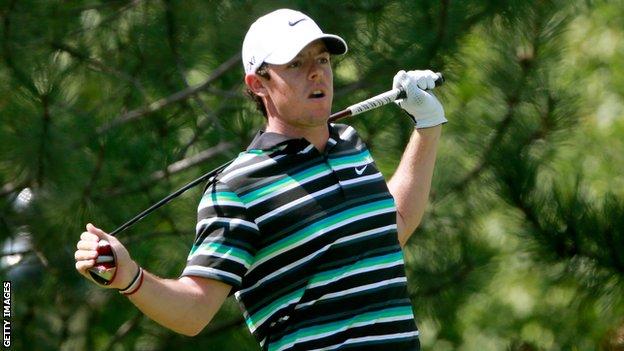 Rory McIlroy's hopes of qualifying for next week's Tour Championship look doomed after a dismal opening 78 at the BMW Championship in the US on Thursday.

Defending champion McIlroy requires a top-eight finish in Illinois to progress to next week's Atlanta event.

His seven-over round left him sharing 66th in the 70-strong field and 15 behind leader Brandt Snedeker.

Graeme McDowell, who needs a top-five finish to progress, shot a 70 which included six birdies and five bogeys.

McIlroy has endured a poor 2013 season following his decision to switch clubs manufacturer at the start of this season.

Since his move to Nike back in January, McIlroy has failed to win a tournament with a best finisher a runner-up spot at the Texas Open a week before the Masters.

McIlroy went into this week's event in 41st place in the FedEx rankings with only the top 30 after the Illinois play-offs tournament going through to the Tour Championship.

After starting at the 10th, McIlroy quickly slipped to two over with a double bogey at the short 11th.

His opening birdie of the game came at the 16th but successive dropped shots at the 17th and 18th saw him going to the turn in 39 as he struggled in the windy conditions at the Conway Farms Golf Club in Lake Forest.

A triple bogey followed at the opening hole and his remaining holes included two further bogeys with his second birdie coming at the seventh.

After also starting at the 10th, McDowell carded four birdies in his opening seven holes to stand at three under but four bogeys followed in his remaining 11 holes as he had to settle for a one-under 70.