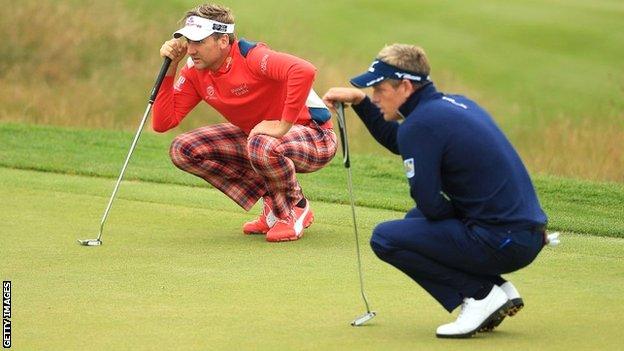 Only 30 players will qualify for next week's Tour Championship in Atlanta and stand a chance of winning the $10m prize as the overall FedEx Cup winner.

Lee Westwood is 30th in the standings but will need a top 15 finish and Rory McIlroy needs eighth or better.

Former world number one Donald is without a title since the Dunlop Phoenix tournament in Japan in November last year and has slipped to 13th in the rankings.

Player of the year on both sides of the Atlantic in 2011, Donald has been an ever-present figure at the Tour Championship since 2009 but lies 54th in the current standings after only four top 10s in 15 starts on the US circuit this year.

The 35-year-old knows the par-71 layout at Conway Farms Golf Club in Lake Forest, Chicago well, however, having been a member for over a decade.

"Certainly I have a lot more familiarity than most of the players and hopefully that's an advantage for me," he said. "I guess if there was ever a year to struggle, to come into an event needing a big week, this is a good one to come to."

Tiger Woods, seeking his sixth title of the year, is second in the standings and has been a frequent winner in Chicago, capturing the PGA Championship twice in nearby Medinah, and also winning on five occasions at Cog Hill in the city.

"Obviously it's very different compared to Cog Hill and Medinah, but it is a nice track," said the 37-year-old world number one. "All the times I've been in Chicago, it's a great sporting town. They come out and support their events. This will be a fun crowd."

Sweden's Henrik Stenson, who was 230th in the world rankings at the start of last year following a combination of illness and loss of form, is at the top of the FedEx list having won the Deutsche Bank Championship in Boston two weeks ago.