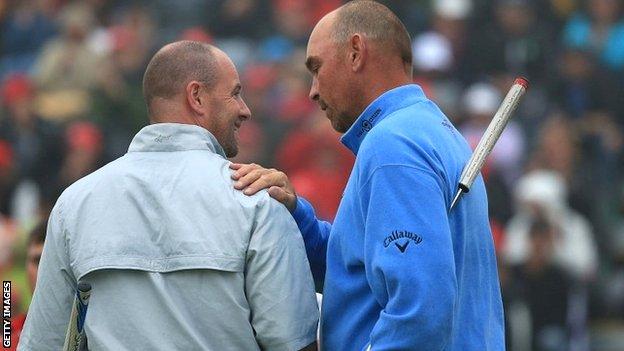 Thomas Bjorn claimed his first title for two years with a play-off victory at the European Masters in Switzerland.

The 42-year-old Dane had gone 47 events since his last win, in the same event, and began Sunday two shots back.

Two ahead by the turn, he shot a 65 to finish 20 under, matched by overnight leader Craig Lee, the Scot adding a 67 to his course record 61 on Saturday.

Bjorn birdied the first extra hole to secure his 14th title and move back into the top 50 in the world rankings.

The start of the final day was delayed by thick fog, which obscured the majestic Crans-sur-Sierre course and prompted the organisers to send half the field out from the 10th tee.

The mountain fog rolled in to halt proceedings again when Bjorn was waiting to hit his tee shot on the 18th and Lee was on the 17th fairway, both tied at 20 under.

As the skies lifted fractionally to allow play to continue, Bjorn parred the final hole in steady rain and Lee was left needing a birdie at the last to win his first European title.

His 20-foot effort touched the edge of the cup but stayed above ground and when they played the 402-yard hole again in the sudden-death play-off, Lee put his tee shot into the fairway bunker.

A superb escape from the sand found the heart of the green but his birdie chance from 18 feet drifted past the hole, allowing Bjorn to roll his 12 foot effort in through the side door.

Bjorn, who dropped only two shots in the 72 holes this week, single-putted the first eight greens in the final round, five of which were birdies.

He was fortunate to escape with a par at the 14th after receiving a free drop when his drive finished under advertisement boards around the 13th tee, but holed impressively from the fringe at the 15th for his 22nd birdie of the week.

Yet to win a major, Bjorn famously squandered a two-shot lead with three holes to play after bunker trouble at the 2003 Open Championship at Royal St George's.

"I've had a hard time dealing with pressure situations and there is no greater pressure than that," he said after receiving his red jacket for winning the European Masters title. "I have to stay focused that's why I don't smile a lot on the golf course."

Asked about qualifying for next year's Ryder Cup for the first time since 2002 he said: "That's a long way ahead. I would love to play one more but time will tell."

Lee, who had never previously led a European Tour event going into the final round, birdied the par-five first hole but saw a series of putts stay up on the front nine.

He salvaged par at the ninth having driven into a bunker on the adjacent 11th hole and then birdied three of the next four holes.

The 36-year-old had been precariously placed at 108th in the Order of Merit, with only the top 110 securing their cards for next season, but moved up to 55th following his impressive performance.