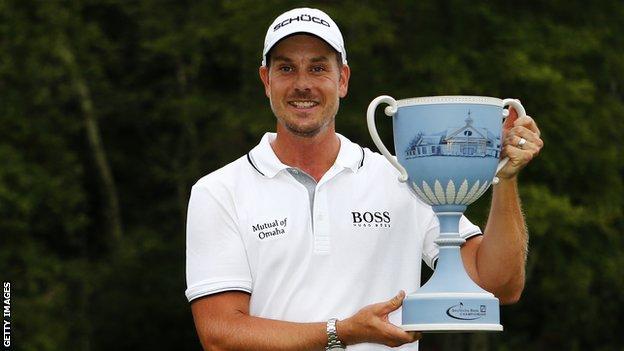 Henrik Stenson shot a five-under-par final round to win the Deutsche Bank Championship in Boston.

Stenson, who has risen to world number 10 after finishing third at the PGA Championship, trailed Garcia by two shots heading into the final round, but five birdies on the front nine moved him into the lead by the turn.

The win takes Stenson above Tiger Woods into top spot in the FedExCup standings after the second of the four play-off tournaments.

Garcia's challenge faded with bogeys on four of the front nine holes and, with his rivals unable to score frequent birdies, Stenson created a cushion between himself and the rest of the field, resulting in a three-shot lead with two holes to play.

Stricker rallied late on with birdies at the 17th and 18th, but Stenson failed to drop the shots needed to force a play-off, signing off with a par at the last.

The victory caps a fine run of form for Stenson, who was ranked 222nd in the world at the start of 2012.

The two-time Ryder Cup winner last won at the South African Open in November 2012, but has surged through the rankings as a result of some impressive finishes, including a second place finish behind Phil Mickelson at this year's British Open.

World number one Tiger Woods finished tied for 65th on four under par, while his compatriot Zach Johnson made a 25-foot birdie putt on his last hole to make the Presidents Cup team, which will play an international team captained by Nick Price in October.