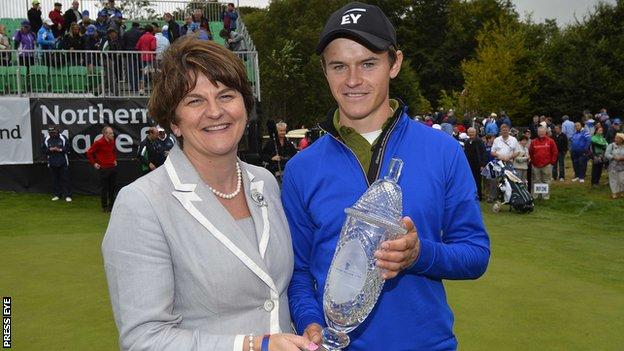 Daan Huizing lost his overnight six-shot lead before taking victory at the Northern Ireland Open as he edged out Oliver Wilson in a play-off at Galgorm.

Dutchman Huizing lost the lead by the turn before moving two ahead again with three holes left only to lose his ball on the 18th tee when one ahead.

Remarkably, Huizing holed a 25-foot bogey putt to force the play-off which he won at the first tie-hole.

The Challenge Tour event will be played again at Galgorm Castle next year.

This was confirmed by the event organisers and the European Challenge Tour immediately after the completion of the tournament on Sunday afternoon.

Challenge Tour record crowds of over 20,000 attended the four days of action at the Ballymena venue with over 8,000 spectators there on Sunday.

And the large galleries that watched Sunday's final day were treated to some thrilling action as a seeming procession for the Dutchman suddenly became a very exciting closing round amid some swirling winds.

Huizing, who recently completed an Economics degree at Utrecht University, has been marked out for golfing stardom after a stellar amateur career which saw him rising to number two in the world rankings.

Chasing his maiden Challenge Tour win after a series of top-10 finishes this season, the Dutchman appeared in control as he opened with two pars.

However, the former Lytham Trophy and St Andrews Links Trophy winner dropped successive shots on the third and fourth after pulled iron shots and he was only two strokes ahead of charging playing partner James Heath after another bogey at the sixth.

Huizing's lead then disappeared on the ninth green after a misjudged 90-yard pitch led to a bogey six with Heath moving to the head of affairs on 13 under by dint of his birdie four.

However, the Dutchman regrouped bravely to regain the lead thanks to birdie twos at the short 12th and 14th.

2008 European Ryder Cup player Wilson, showing improved form after a three-year slump, emerged as Huizing's main challenger over the closing four holes as he eventually signed for a four-under-par 67

The 32-year-old Englishman cut the Dutchman's lead to the minimum with a birdie on 15 and while he dropped a shot at the next, a three at the par-four 17th again put pressure on the leader.

Wilson's inability to get a birdie at the par-five last appeared to have eased the strain on Huizing but amazingly the leader lost his ball after driving into the thick rough off the final tee which left him needing to make a birdie with his second ball to force a play-off.

Huizing's chances appeared remote after a poor 40-yard pitch but he showed remarkable character to hole his 25-foot bogey putt which saw him completing a 74 as he forced the play-off.

A rollercoaster of a day for Huizing ended with him holing his eight-foot birdie putt in the play-off to take the victory and the £23,350 first prize after Wilson had just missed his attempt from 10 feet.

"It's the best course we've played on all year and the crowds and tournament set up were amazing," said Huizing, who looks set for an automatic European Tour card for 2014 after moving to sixth in the Challenge Tour rankings.

"I won the hard way but at least it kept things exciting for the crowds."

Scotland's Jamie McLeary ended up only one shot off the pace as he fired a round-of-the-day 66 but both he and Heath, who also ended up on 12 under, must have both rued their failure to birdie the last.

Germany's Bernd Ritthammer finished on 11 under after a closing 70 but never really threatened to take victory on the final day after some first-nine struggles.

Ballymena amateur Dermot McElroy regrouped brilliantly from his disappointing 74 on Saturday to card a closing 67 which left him sharing ninth place at the finish.

After going to the turn in 33, McElroy showed huge character to recover from a chastening double bogey at the 11th as he played his final seven holes in four under par.

"It was my chipping that really kept me in it and my putting was very good today," said McElroy, 20, who plans to take a break before focusing on Tour School later this month.

Clandeboye man Jonathan Caldwell could also look back on an encouraging week after a closing 70 left him alongside McElroy on six under.

Caldwell will play the remainder of the PGA EuroPro season rather than go to the first stage of Tour School.