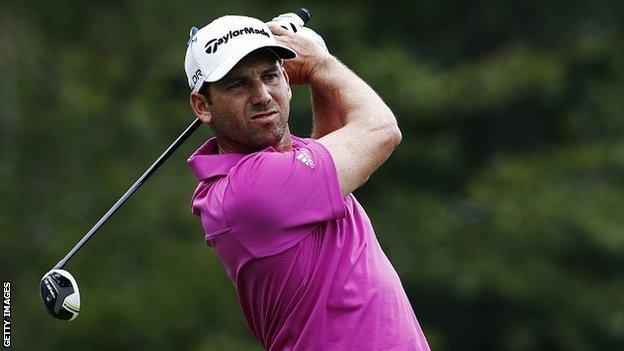 Sergio Garcia eagled the 18th hole to take the lead after two rounds of the Deutsche Bank Championship.

The Spaniard followed up an opening round of 65 at TPC Boston with a seven-under-par 64, which included seven birdies and took him to 13 under par.

He leads American Roberto Castro and Henrik Stenson of Sweden by one after they carded 65 and 63 respectively.

England's Justin Rose also shot an eight-under 63 to move into a share of sixth place on nine under.

US Open champion Rose, whose opening round was spoilt by two sixes on the back nine, shot eight birdies in a bogey-free Saturday.

His fellow countryman Ian Poulter is in a group on eight under after a three-under 68, alongside overnight co-leader Phil Mickelson.

Brian Davis of England, who shared the first round lead with Mickelson, slipped back to seven under, the same score as world number one Tiger Woods.

Northern Ireland's Rory McIlroy, last year's winner, is a long way off the pace on one under following a 71.

The world number four found the hazard at the par-five 18th to card a double-bogey seven.