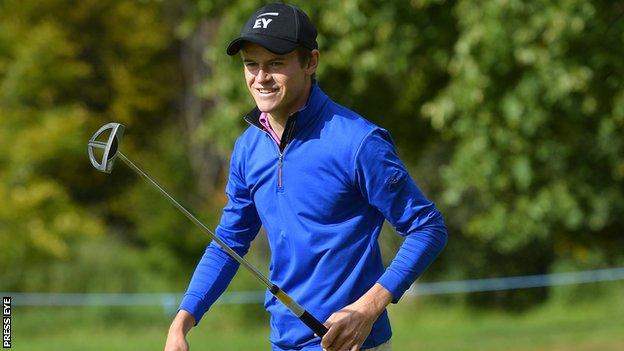 Dutchman Daan Huizing will take a six-shot lead into the final round of the Northern Ireland Open after producing a flawless 66 on Saturday.

Huizing kept a bogey off his card to be six ahead of Sweden's Jens Dantorp, England's James Heath and Germany's Bernd Ritthammer going into Sunday.

2008 Ryder Cup player Oliver Wilson is in fifth spot seven off the pace.

Jonathan Caldwell is the leading Irish player in share of 12th place on five under after firing a 71 on Saturday.

Ballymena amateur Dermot McElroy lost ground as a disappointing opening 12 holes led to him carding a three-over 74 which dropped him back to a share of 36th on two under.

Derry man Michael McGeady, who was only one off the pace after his 65 on Thursday, also slipped back to two under after a 74 which included five bogeys in marked contrast to his nine birdies on day one.

Mourne amateur Reeve Whitson performed creditably as a one-over 72 left him on one under but the big talking point at the Ballymena course was Huizing's dominant performance in front of over 6,000 spectators.

The 22-year-old Dutchman has now gone 35 holes without a bogey at Galgorm Castle as his rounds of 65, 66 and 66 put in control of the tournament.

Huizing started his round with six pars on Saturday but four birdies in six holes from the seventh saw him pull away from the field.

Even a run of five straight pars from the 13th didn't see his advantage trimmed and for good measure, he birdied the last to put further daylight between him and the trio on 10 under.

"It took me a few holes to relax into the round today but once I did that I managed to play really well and take a few chances," said Huizing, who has produced four top five Challenge Tour finishes in just six appearances this season.

"To be six ahead is really good because I can probably be a little bit more conservative tomorrow."

European Ryder Cup star from 2008 Wilson showed that he is edging back to some kind of form as his 68 left him alone in fifth place on nine under.

"At the start of the year, I was playing absolutely terribly. I didn't know where the ball was going but it has been getting better over the last month or so," Wilson told BBC Sport.

Wilson's compatriot Sam Walker charged up the leaderboard after squeezing into the weekend action on the cut mark of one under as he equalled the best round of the week with his 64, which included an eagle at the ninth.

Clandeboye man Caldwell battled back well with two late birdies which helped undo some of the damage of three straight bogeys from the ninth as he signed for a 71.

Amateur McElroy opened with five pars on Saturday but a dropped shot at the sixth was then followed by three straight bogeys after the turn.

McElroy's lone birdie came at the last which left him on two under alongside McGeady.

Former Madrid Masters champion Ross McGowan, who shared second place overnight, tumbled down the leaderboard as a 76 dropped him to three under while three-time European Tour winner Nick Dougherty is on one under after a disappointing 73.