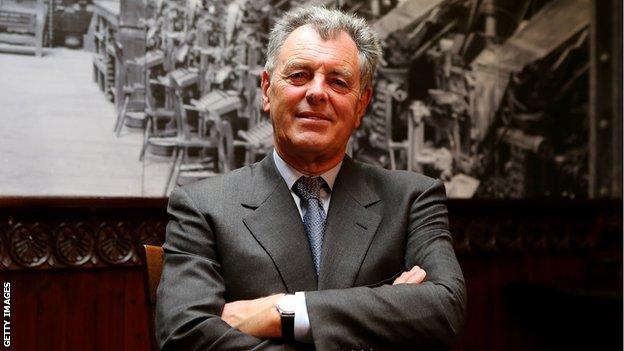 The 64-year-old, who was taken ill on Thursday, is understood to have a heart problem and will spend a fourth night at Aberdeen Royal Infirmary.

Nephew and fellow golfer Stephen said: "My family is in disarray at the moment. It is obviously a worrying situation. We are all anxious."

NHS Grampian will provide an update on Monday morning.

Gallacher senior, who lives in Berkshire, is the father of three children, the most famous of whom is television presenter Kirsty.

Renton Laidlaw, the veteran broadcaster and journalist who has known Gallacher for more than 50 years, told BBC Radio Scotland's Golf Show on Sunday: "I was up at Aberdeen on Saturday. He is obviously in a critical condition and he is sedated but he has had a quiet night.

"I think he is a fit person, he doesn't drink, he keeps himself fit, he doesn't smoke and hopefully he will make a good recovery.

"We don't know just what brain damage there might be but we are keeping our fingers crossed that it's not too bad."

Current European Ryder Cup captain Paul McGinley, currently competing in the Wales Open, said: "I'm thinking about him like everyone else and hoping he will pull through.

"He is a guy I know pretty well, he lives near me in Sunningdale, and I have played golf with him many times.

"I've spoken to him about the Ryder Cup captaincy and he is a mine of information. He was captain three times and between him and Tony Jacklin they have more experience than anyone. My thoughts are with him and the family."

George O'Grady, chief executive of the European Tour, said: "We are in touch with Bernard's wife, Lesley, and the Gallacher family and, obviously, we join with everyone in wishing Bernard a speedy recovery."

Bathgate-born Gallacher led Europe to victory over the United States in the Ryder Cup in 1995, having twice previously been losing captain.

He had also been a player in the competition eight times and won 10 tournaments on the European Tour.

Gallacher turned professional in 1967 and was named the Sir Henry Cotton rookie of the year the following season.

In 1969, he became the youngest winner of the prestigious PGA Championship at 20 years and 97 days.

That record stood until earlier this year, when Italian Matteo Manassero triumphed at Wentworth aged 20 years and 37 days.