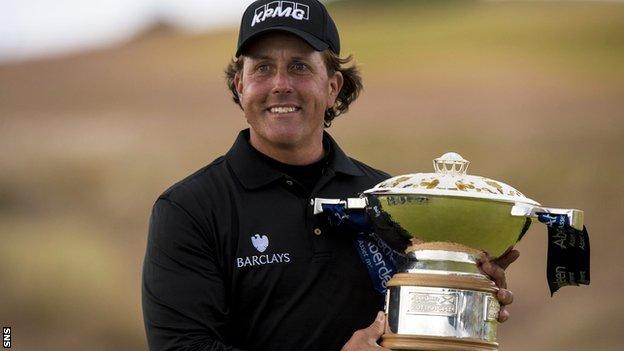 The American left-hander survived an early wobble but three-putted the 18th, forcing the play-off with Grace, the pair finishing on 17 under par.

Mickelson, 43, birdied the first play-off hole, a sublime chip leaving him a tap-in, a score Grace could not match.

Stenson, with a final round of 73, tied with Denmark's JB Hansen for third place on 15 under par.

Scotland's Martin Laird hit the best round of the day, a four-under-par 68, to finish tied-fifth with Northern Irishman Gareth Maybin and England's John Parry, all on 14 under.

Hansen had an astonishing round, with a quadruple-bogey nine at the second hole followed by eight birdies and three bogeys.

The blustery conditions on the Moray coast meant scoring was much more conservative than during the first three days.

Stenson had led Mickelson, Grace, Parry and America's Peter Uihlein by two strokes, on 16 under, after Saturday's play.

But the links course was buffeted by intermittent gusts of 20-30mph, limiting the number of sub-70 rounds on Sunday to five.

Grace had teed off in the group ahead of Mickelson and was in the Art Deco-styled clubhouse on 17 under, thanks to a back nine of 32, as Mickelson had two putts on the final green to win the tournament.

However, the popular American knocked his 20ft birdie putt at the par-five some 4ft past the hole, then failed by a fraction to sink his fifth shot, resulting in a sudden death play-off, played on the 18th hole.

While the top two delivered plenty of drama, Hansen's round was pure theatre.

The 22-year-old Dane dusted himself down from his horror nine on the second to register five birdies in succession as he chased his maiden European Tour title.

Hansen picked up another shot on the ninth to be out in 34 and when he birdied the 10th as well he was suddenly in the outright lead.

At 17 under, the Challenge Tour graduate led by one from Stenson, who had carded two birdies and two bogeys in his first eight holes, with Mickelson another shot back.

But the eventual winner had made an excellent recovery of his own after topping his second shot to the first and then three-putting for a double-bogey, the world number eight then carding four birdies and one bogey in his next five holes.

With five pars and three birdies in holes 10 to 17, there was no sign that Mickelson would wobble on the final hole.

However, he recovered superbly from his bogey six on the 72nd hole of the tournament to lift the trophy at the links course in the play-off.