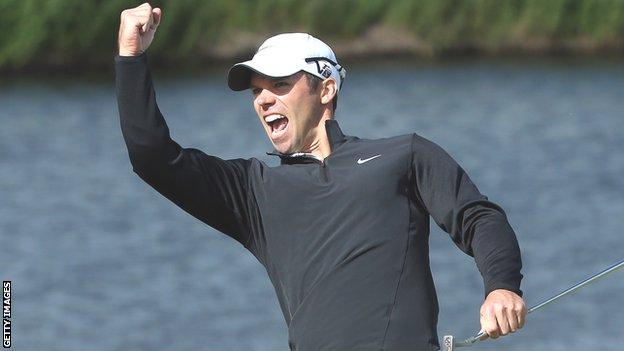 Paul Casey secured his first victory in over two years with a three-shot win in the Irish Open at Carton House.

The Englishman, who plummeted from third in the world rankings to 169th, fired a superb five-under-par 67 in blustery conditions to finish 14 under.

Jose Maria Olazabal was tied for the lead midway through his round but faded to finish joint fifth on eight under.

Casey claimed the 12th European Tour title of his career in dramatic fashion after overturning a four-shot deficit in the final round.

The 35-year-old carded five birdies in six holes from the eighth at the same venue where he finished second to Thomas Bjorn in 2006.

That gave Casey a three-shot lead and seemingly one hand on the trophy, but after dropped shots at the 15th and 16th his advantage was cut to one.

However, the former Ryder Cup star sealed the win in style with an eagle from 45 feet on the par-five 18th.

Casey was ranked third in the world in 2009 but began the week 169th after form and fitness problems, most notably in 2012 after dislocating his shoulder while snowboarding.

His last European Tour victory came in Bahrain in January 2011 but he qualified for the recent US Open with a round of 64 at Walton Heath.

"What a grandstand finish - winning an Irish Open is an absolute dream.

"It was a shaky start, I didn't hit the ball particularly close going out but when the putts did start to go in I got on a bit of a roll."

Olazabal, 47, had moved into a share of the lead with four birdies in his first 10 holes but bogeyed four of the last eight to card a 72.

Shane Lowry and Galgorm touring professional Gareth Shaw were the leading Irish players on eight under after both shot a 69.