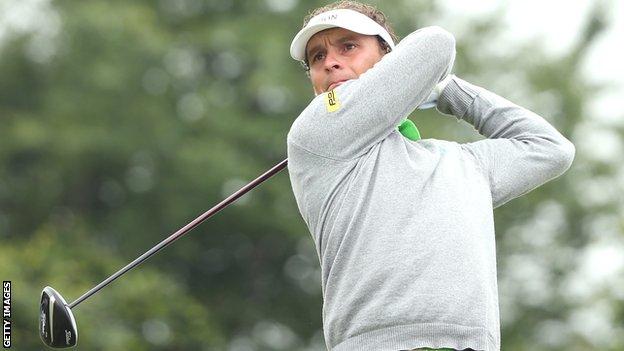 Joost Luiten leads by one shot at the Irish Open after a superb six-under-par 66 in the third round at Carton House.

The Dutchman moved to 13 under with Pablo Larrazabal, who also carded a 66, his nearest challenger while Robert Rock (71) is a further two shots back.

Paul Casey's good form continued with a 67, leaving him nine under and in a tie for fourth with Scotsman Scott Henry.

You still have to go out and make some birdies, be patient and take it one shot at a time

Peter Lawrie is the best-placed of the Irish players on six under, while Shane Lowry slipped back to five under.

Lawrie's 67 saw him climb to joint 18th but Lowry, who started in a tie for third place, struggled to a 74 on Saturday.

Jose Maria Olazabal, who hit 71, is in a group on eight under, while joint overnight leader Peter Uihlein is back on seven under following a 74.

Luiten is a man in form after his recent Lyoness Open win and his bogey-free round included birdies at four, six, nine, 10, 13 and 15.

The 27-year-old held his nerve at the 18th to hole a 10-foot putt for par, and he is confident going into Sunday's final round.

"I don't really care who is behind me, as long as they stay behind me," said Luiten.

"You still have to go out and make some birdies, be patient and take it one shot at a time.

"It's always good to have a win under your belt. You can go a little bit more for the win - you have nothing to lose so that's how I am going to go out on Sunday.

"I've been working on my swing for a long time and am finally fully fit after a shoulder problem which meant I couldn't practise as much on the range.

"It has been good for a couple of months and feels really good now."

Galgorm touring professional Gareth Shaw, who hit 70, and Portrush's Alan Dunbar (72) are the best of the Northern Ireland contingent on five under.

Michael Hoey (72) is one under, with fellow Belfast player Damian Mooney (76) two over.

It has been a poor tournament for Ireland's recent major winners with Rory McIlroy, Graeme McDowell, Darren Clarke and Padraig Harrington failing to make the cut.

World number two McIlroy stayed on at Carton House and was using the practice facilities on Saturday as he begins his build-up to the Open at Muirfield, which starts on 18 July.

"I have to iron out a couple of little flaws in my swing and hit a lot of balls - if I do that I'm confident I'll turn up at Muirfield in good shape," said McIlroy.