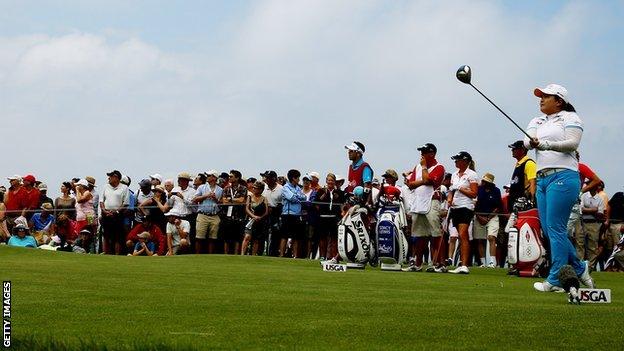 Inbee Park shot a four-under 68 to move into the lead at the US Women's Open after the second round at New York's Sebonack Country Club.

The South Korean, 24, sank a 12-foot birdie putt on the 18th to move to nine under, two ahead of compatriot In-Kyung Kim, shortly before play was suspended because of thick fog.

England's Jodi Ewart Shadoff could not complete her second round but is five shots off the lead in joint third.

The South Korean is now eight shots off the lead.

Scotland's Catriona Matthew is 10 shots behind Park after following a first-round 70 with a disappointing 75 in the second.

"We got very lucky that we finished," said Park, who is chasing a third major title this year.

"I played very good golf. I gave myself a lot of good opportunities, a very good ball-striking day. The long putts seemed to be going well.

"I left a couple [of birdie putts] out there, but I am very satisfied with Friday's score."