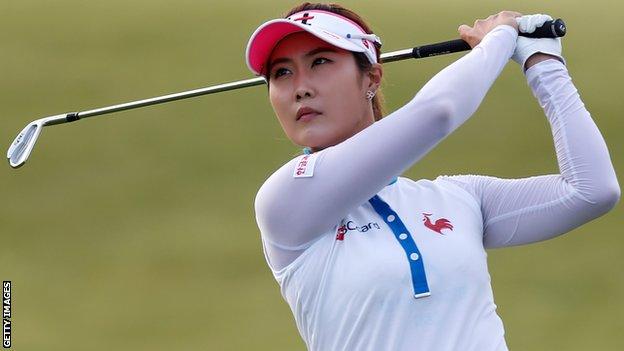 Ha-Neul Kim holds a one-shot lead after Thursday's first round of the US Women's Open in Southampton, New York.

The South Korean made six birdies in a round of 66 to move ahead of compatriot and world number one Inbee Park, who had led for most of the day.

"I'm just happy to be here and to be playing in this big event," said the 24-year-old leader.

England's Jodi Ewart Shadoff and Scotland's Catriona Matthew are four shots off the lead on two under.

Swedish pair Caroline Hedwall and Anna Nordqvist are on four-under par, alongside South Korea's In-Kyung Kim and Lizette Salas of the United States.

Ha-Neul Kim birdied the final hole to take an outright lead from Park, who is chasing a third major crown this year.

Park, 24, said: "The way I'm playing, the way things have been going, the way I've been getting the luck, I think I am in the zone.

"I've been playing the best golf of my career at the moment. I really just want to enjoy the moment."

Tournament organisers moved several of the tees to shorten the holes because of concerns over a poor weather forecast for Thursday.