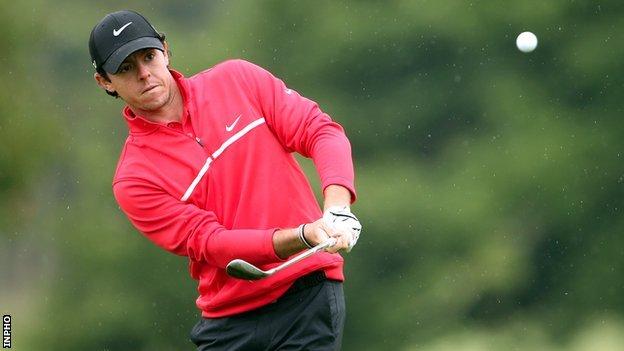 Rory McIlroy posted a disappointing opening round of two-over-par 74 to lie eight shots behind clubhouse leader Oscar Floren at the Irish Open.

Michael Hoey and Shane Lowry lie one shot off the lead after shooting impressive five under par totals of 67.

Graeme McDowell, Gareth Maybin, Alan Dunbar and Padraig Harrington are all well placed on one under, but Darren Clarke finished on a three over par 75.

New touring Galgorm professional Gareth Shaw is one over while Northern Ireland amateur Reeve Whitson is four over.

Hoey hit four birdies and just one bogey on the front nine and came home with two further birdies to lie one shot behind Floren of Sweden.

Hoey and Offaly's Shane Lowry, who won the tournament as an amateur in 2009, are among four players on five under par.

Lowry opened up with a bogey on the tenth hole but managed six birdies during his round to hold a one shot lead over compatriot Cian McNamara, Andrew Dodt, Paul Casey and Thomas Bjorn.

Bjorn won the Irish Open when it was last played at Carton House in 2006 while Casey is attempting to recapture the form which took him to a career-best world ranking of three four years ago.

The pair are joined on four under par by surprise packages, Australian Dodt and McNamara.

European Ryder Cup captain Paul McGinley is on two under.

McIlroy won five times last year, including his second major title in the US PGA Championship at Kiawah Island, but has struggled to reproduce that form in 2013.

The 24-year-old finished 41st in the US Open at Merion a fortnight ago and on Wednesday apologised for throwing a club and bending his nine iron out of shape during a final round of 76.

Starting from the 10th, world number two McIlroy bogeyed the 11th and 12th before hitting back with a birdie on the short par-four 13th, but then dropped another shot on the 18th after a poor drive and equally poor pitch.

As the light rain which had been falling for most of the day intensified, McIlroy missed from 15 foot for a birdie on the par-five fourth and then three-putted the par-five eighth from long range.

A birdie on the last came as welcome relief but the two-time major champion still admitted to feeling "a little lost" after his round.

"I didn't really get anything going from the start and tried to pick up some birdies to rescue my round after a couple of bogeys early on," conceded McIlroy.

"It wasn't the greatest day and there are no aspects of my game that are really strong at the moment.

"I just have to keep trying to shoot some good scores and hopefully it will turn round."