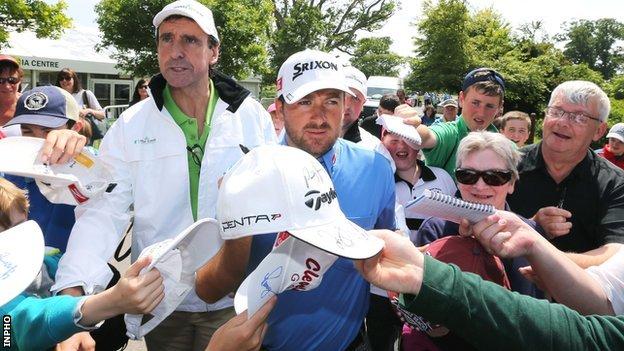 Graeme McDowell aims to bounce back from his US Open nightmare by challenging for the Irish Open at Carton House, which starts on Thursday.

The former US Open champion from Portrush missed the cut at Merion after rounds of 76 and 77.

"Merion has done nothing but motivate me and make me more hungry for being in the mix come the weekend," he said.

"There's no doubt I would love to win this one. It's certainly one I'll be giving 100% to this week."

Former Open champion Clarke came third when the Irish Open was last played at the County Kildare course in 2006.

Shane Lowry was the last Irish victor in 2009 while Welshman Jamie Donaldson will defend the title he won at Royal Portrush last year.

McDowell will attempt to become the first Northern Irish winner of the tournament since Fred Daly in 1946.

"There's no doubt the Irish Open is on my golfing bucket list," added McDowell.

"To win your national Open is a very special win in a player's heart. It's been almost 70 years since a Northern Irish player has won this event.

"That's a stat we would love to change this weekend - I'm ready to go this week and I'm looking forward to it."