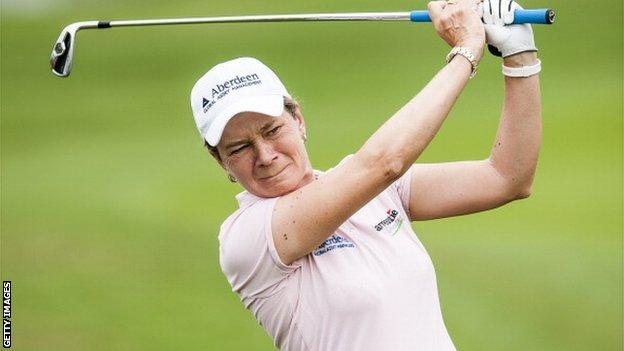 Scotland's Catriona Matthew will aim to make amends for her narrow defeat in the LPGA Championship at this week's US Women's Open in Sebonack, New York.

Matthew, 43, lost to South Korea's Park Inbee in a play-off for the year's second major at Locust Hill last month.

Park also won the first major of the season, the Kraft Nabisco Championship at Mission Hills, California, in April.

"This is the best I'm playing in my career so far," said Park, the 23-year-old world number one.

Park is the youngest ever winner of the US Women's Open when she took the title at Minnesota's Interlachen Country Club in 2008.

"I'm hitting the ball and striking it great and putting it very well," added Park, who won her fifth LPGA Tour title of the season on Sunday.

"Especially last week, I hit the ball very well and that gave me a lot of confidence coming into this week."

World number two Stacy Lewis was phlegmatic about Park's current run of form, which could see the South Korean become the fourth player to win three LPGA majors in the same season.

"Every time I feel like she may have an OK round, then the next day she's up there on the leaderboard again. She's just always there, always giving herself a chance, and nothing really seemed to faze her."

Matthew, who won the Women's British Open in 2009 for her solitary major title, is the highest-ranked Briton at 14th in the world.

The Women's British Open from 1-4 August at St Andrews and the Evian Championship in France from 12-15 September are the final two women's majors of the season.