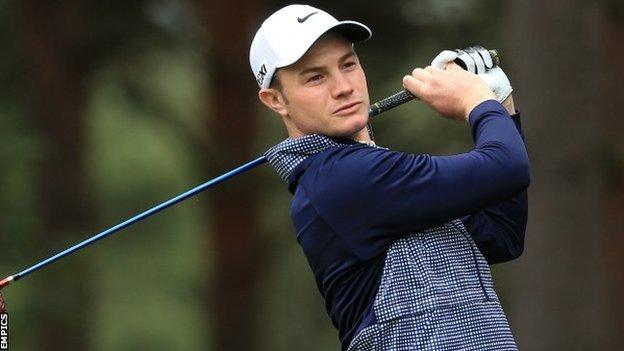 England's Oliver Fisher and three other UK golfers booked their places at the 2013 Open at Europe's International Final Qualifying event at Sunningdale.

The 24-year-old, who missed out in a play-off last year, was one shot behind American winner Brooks Koepka.

The 23-year-old Koepka carded rounds of 69 and 65 to book his spot at Muirfield next month, while his playing partner took second place in the 36-hole event, following his morning 70 with an afternoon 65 round Sunningdale's Old Course.

The winner's day began with a 06:30 BST flight from Scotland, less than 12 hours after earning his European Tour card with a third Challenge Tour win of the season in the Highlands at Spey Valley.

Maybin and McEvoy finished a further stroke behind Fisher on three under, along with fellow qualifiers France's Gregory Bourdy and Spain's Alvaro Quiros.

Glaswegian Jamieson was on the same two-under mark as veteran Swede Niclas Fasth.

The ninth and final place was decided by a play-off between four players.

Former Ryder Cup star Paul Casey also missed out, along with Frenchman Thomas Levet, who lost in a four-man play-off to Ernie Els in the 2002 Open at Muirfield.

It will be the first Open England's Casey has missed since his debut at Muirfield 11 years ago.

Of the 96 starters at Sunningdale, 26 failed to finish, the majority of whom pulled out following their morning round.

In Regional Qualifying, held at 14 courses around the country, two names better known for their skills with a bigger ball failed to make progress.

West Ham midfielder Gary O'Neil, trying his luck for the second year running, shot a nine-over 83 at East Sussex National, while former England squad player Jimmy Bullard fared little better at The London, missing out by four shots with a 78.

Qualifiers from the Regional events go through to Local Final Qualifying at four venues in Scotland on 2 July.

The 142nd Open Championship takes place at Muirfield in Scotland from 18-21 July.