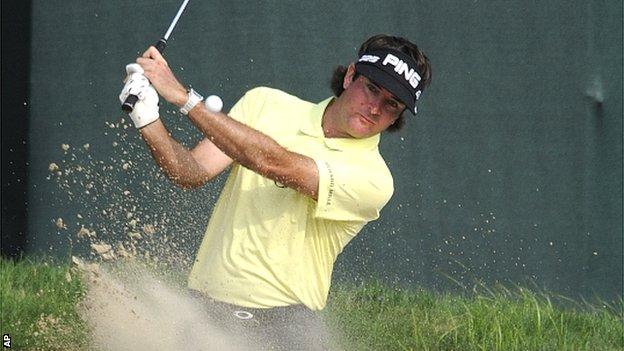 Former Masters champion Bubba Watson bogeyed three of his final six holes to drop back into a three-way share of the lead at the Travelers Championship.

Watson, without a win since Augusta last year, birdied three of his first six but ended with a 70 to join Charley Hoffman and Graham DeLaet at 10 under.

But Padraig Harrington is one stroke further back after four bogeys in a 72.

I never thought a guy from Bagdad, Florida named Bubba would have a chance for five wins on tour

Watson, 34, recorded his first Tour victory on the 6,841-yard par-70 TPC River Highlands course in Cromwell, Connecticut three years ago when Rose squandered a three-shot overnight lead in the final round.

The American made a strong start to round three and at one stage led by four shots.

A precise 93-yard approach shot ended inches from the cup at the second and he made another birdie at the next, courtesy of a 32-foot putt from just off the green.

But bogeys at the 13th and 15th were followed at the 17th when he found the bunker after being distracted on the tee by a spectator's conversation.

Watson's second shot hooked just over a water hazard, hit a rake and landed in a greenside bunker; his third was just off the green and he came up short with an 18-foot attempt for par.

The effervescent 34-year-old remained upbeat, however, and said: "I hit some shots today that were really good, some quality shots but got a couple bad breaks here and there but that's golf.

"At the end of the day I still have a chance on Sunday and that's what we are always looking for on the weeks we are playing.

"It would be my fifth win and I never thought a guy from Bagdad, Florida named Bubba would have a chance for five wins on tour.

"The golf course sets up so well for me. I love the tee shots - there are a lot of cut shots, which I love to do off the tee. I got a lot of wedges and short irons here and I can make putts sometimes so it's good."

Hoffman, who has won twice previously on the PGA Tour, was leading the Travelers tournament last year when he hit his tee shot on the par-4 17th into the water which led to a double bogey, and a bogey at the 18th saw him eventually finish in a tie for second.

"I'd be lying to say I'm not going to think about that tee shot,'' said the 36-year-old American, who began his opening round with two eagles in a 61, of the possibility of facing the same situation this year.

"But I'm a much more mature, better player than I was a year ago and don't feel uncomfortable on that tee shot.''

Canadian DeLaet, 31, has yet to win on the Tour but began his back nine with four straight birdies.

A bogey at the difficult par-3 16th checked his progress, but he finished by delicately rolling in a downhill birdie putt from the fringe on the 18th hole.

Rose, the first Englishman to win a major since Nick Faldo in 1996, moved into contention after two birdies and a single bogey on each nine.

He said: "When I've gotten on a good run of form I have kept it going for two or three weeks. That's the goal now. I've been playing really well this week."

Compatriot and world number 12 Lee Westwood recovered from two dropped shots in his first three holes to post four birdies in six holes for a 69 that left him at one under overall.