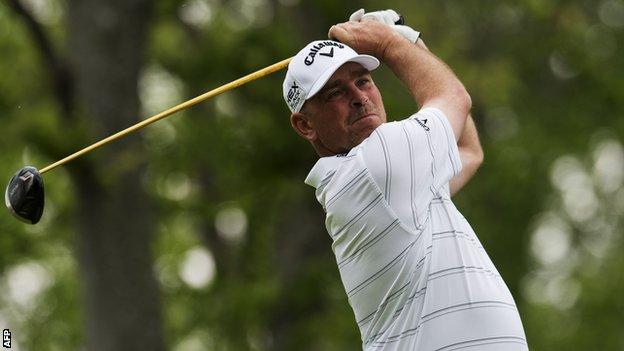 Thomas Bjorn moved into contention for a third Munich Open title as he closed to within one shot of the lead with a stunning penultimate round of 65.

Overnight leader Els fired a 69 for the second consecutive round after finding three birdies in the back-nine.

Bogeys at the sixth and 13th looked to be damaging for his hopes, before he carded two birdies in the final three holes to remain in the mix for a first European Tour trophy.

The 27-year-old was sat alongside Bjorn, who hoped he could claim his first win of the season on Sunday after finishing second and in a tie for fourth in his last two events.

"I've always played this golf course well. It suits my eye well and I would generally say I've got a pretty good wedge game and that comes in handy on this golf course."

Play had been delayed for more than two hours by heavy rain which led to parts of the course flooding.

Despite the conditions, England's Danny Willett still has a chance of becoming the first man to successfully defend the title after he went into the club house on 12 under after a steady round which was lifted by an excellent eagle on 11.

He was joined on that overall score by home favourites Marcel Siem and Martin Kaymer.