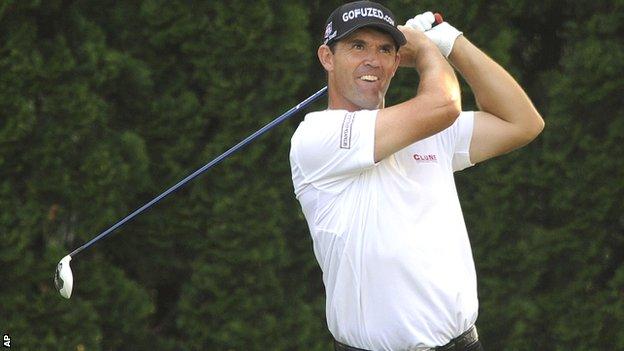 Irishman Padraig Harrington carded a second successive round of 66 to move two shots off the lead at the halfway stage of the Travelers Championship.

The 41-year-old, who has not won an official tour event since the 2008 USPGA, had four birdies in five holes.

Bubba Watson, without a title since winning his first major at last year's Masters, built a two-shot lead at 10 under by adding a 67 to his opening 63.

Harrington, who finished tied 21st at last week's second major of the season and tied 10th at the St Jude Classic the week before, has missed four cuts this season, including at the Masters.

He began his round at the 10th hole and recorded six birdies in total, with one bogey on each nine, to share second with 22-year-old American Patrick Reed, who secured his second top-10 finish of the season at the St Jude Classic.

"It did get windy out there," Harrington said after his second round in Connecticut. "It was a challenge but there were still opportunities to make birdies.

"I didn't hit it perfect in any shape or form on the first two days, so I'm not exactly brimming with confidence. I'm very pleased with the score but my score is flattering.

"I holed some long putts out there so I feel like I need to play a bit better on the weekend. I can't always rely on holing 20-25 footers."

Watson, who finished 13 over in a tie for 32nd at Merion last week, recorded his first Tour victory on the 6,841-yard par 70 TPC River Highlands course in 2010 when Rose squandered a three-shot overnight lead in the final round.

"The golf course has generous fairways and you're having short irons into a lot of the holes," said the 34-year-old left-hander. "And it's playable from the rough, unlike last week."

Watson, seeking his fourth PGA Tour victory, has won only once from the six previous occasions he has led after 36 holes, that coming in 2011 at New Orleans.

Rose, who won his first major in Merion, admitted: "I haven't hit the ball quite as solidly as I would have liked to.

"I just think I need to maybe go and take care of my body a little bit, some stretching, some physio, maybe a workout, just work out a few kinks."

Former world number one Lee Westwood made the cut by a single shot at level par after a 73 featuring only one birdie, but European Ryder Cup team-mate Nicolas Colsaerts missed out after his 73 left him at four over.