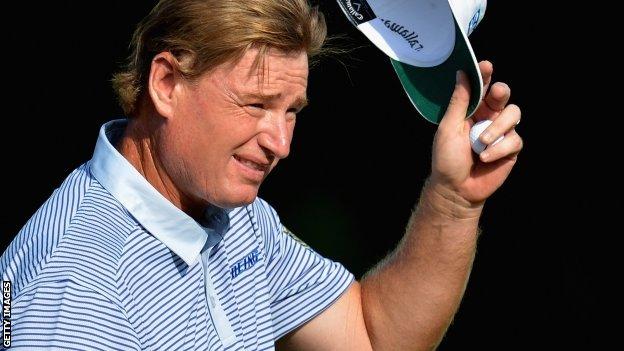 South Africa's Ernie Els leads the Munich Open on 12 under at the halfway stage after following his opening-round 63 with a three-under 69 in Germany.

Els sank six birdies but a double-bogey six at the seventh and a dropped shot on the 16th blighted his card.

England's Matthew Baldwin birdied the ninth, his last, to also shoot a 69 to move up to joint second with France's Alexander Levy (68).

Defending champion Danny Willett's seven-under 65 lifted him to 10 under.

Willett, who was among the morning starters from the 10th, had a couple of birdies in his first nine holes and the Yorkshireman picked up five more shots on the second nine to briefly put him top of the leaderboard and in contention for the weekend.

"It is a birdie-fest out here," he said. "People make a lot of putts and the greens are obviously better in the mornings than the afternoons, but if you can keep hitting it inside 15-20 feet you have a chance."

Overnight leader Els continues to lead the way though after a birdie on the 18th moved him one clear of the field.

The 43-year-old, who will defend his Open title at Muirfield in July, said: "I'm quite fortunate to be where I am. I didn't play as well as on Thursday. I fought hard for a score and I'm satisfied with that.

"You just want to stay in the race and keep trying to go forward."