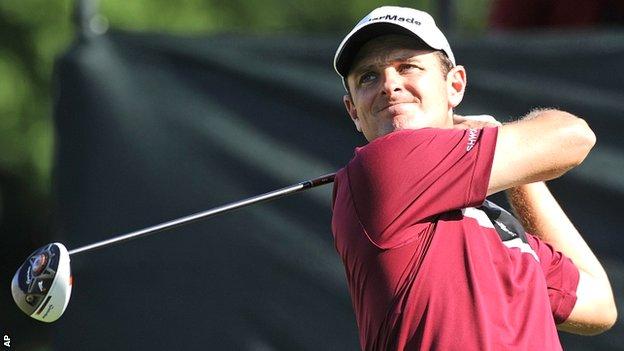 Justin Rose returned to action for the first time since his by shooting a three-under-par 67 at the Travelers Championship in Connecticut.

Rose became the first Englishman to win a major since Nick Faldo in 1996 with victory at Merion last weekend.

Four days on, the 32-year-old was six shots behind first-round leader Charley Hoffman at the Cromwell course.

Hunter Mahan was one shot back after a 62, with Bubba Watson on seven under and six players on five under.

"Being announced as the 2013 US Open champion, I couldn't help but smile before I hit my first tee shot," said Rose.

"That's an achievement that I've been dreaming about."

Rose had more reason to smile when he birdied the first, but three bogeys in the next four holes left him two over par.

He then birdied the seventh and picked up four further shots in five holes from the 12th to remain in contention.

"I had a sluggish four or five holes where I struggled, but I stayed patient," he added. "I've stayed sort of committed to the same things that worked so well for me last week. That was my goal today, really.

"When you play a tournament like this, it's about keeping steady pace. If you put four rounds in the mid 60s together, you're going to be very, very close."

Hoffman hit two eagles in a stunning opening 61 for nine under.