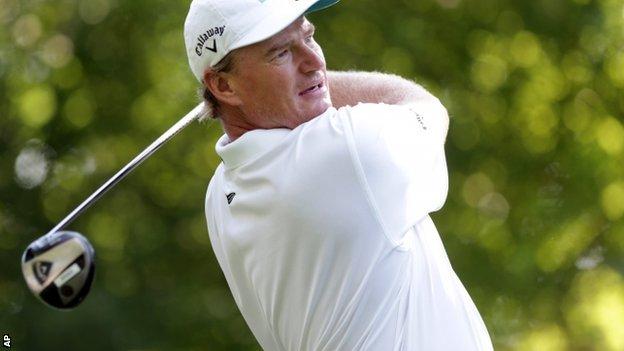 South Africa's Ernie Els shot a nine-under-par 63 to take the first-round lead at the Munich Open in Germany.

The reigning Open champion had seven birdies and an eagle in a bogey-free opening round that was just one shot outside the course record.

England's Matthew Baldwin is in a group of four players, including Germany's Martin Kaymer, on eight under.

Tom Lewis, winner of the Silver Medal for leading amateur at the 2011 Open, is in a tie for sixth on seven under.

Englishman Lewis opened his round with a bogey on the par-four 10th but eagled the par-five 11th and picked up six birdies in eight holes to catapult him up the leaderboard.

However, nobody could match Els, who arrived in Germany on the back of finishing joint fourth at last week's US Open.

"You walk out of a torture chamber into a nice parkland golf course," he said, referring to the relative ease of the Munich course in relation to Merion's punishing layout where England's Justin Rose won with a score of one over.

"I felt I started swinging it good over the weekend at Merion. Sixty-three was very nice. I haven't heard that number for a while."

The 43-year-old started quickly with six birdies in his opening 11 holes and would have equalled the course record of 62 had his eagle putt on the ninth hole, his last, not pulled up six inches short of the cup.

Baldwin and Sweden's Alex Noren both holed eight birdie putts in bogey-free rounds of 64, while Robert Jan Derksen of the Netherlands had six birdies and an eagle in his eight-under-par score.

A bogey on the par-four seventh was Kaymer's only dropped shot among nine birdies.

Lewis is level with compatriot Matthew Nixon who mixed four bogeys, seven birdies and two eagles in his eventful round of 65, while France's Alexander Levy had a more conventional seven birdies and no bogeys to join the pair on seven under.