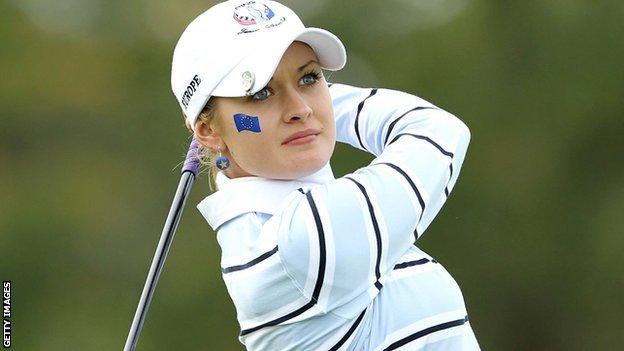 Amy Boulden and Becky Harries have been selected in the Great Britain and Ireland team to face Europe in the Vagliano Trophy.

The nine member Great Britain and Ireland team, captained by Tegwen Matthews, take on the best of Europe in France in June.

"Having two Welsh players in the team is one of the best representations we have had," said Golf Union of Wales director of performance Ben Waterhouse.

Tenby's Bethan Morris is a reserve.

Welsh Open champion Boulden, 19, of Conwy and Welsh Amateur champion Harries, 26, of Haverfordwest will play alongside the best players in Europe, including Georgie Hall who won the Ladies Amateur Championship in Machynys in Llanelli last weekend.

"They have both performed strongly over the last few years and fully deserve to be involved at this level," added Waterhouse.

"Becky won the Welsh Amateur once again to show her ability, while Amy has plenty of experience at this level as well as winning the Welsh Open and the Leveret Trophy this season.

"Welsh ladies golf has a few strong competitors and the moment, spearheaded by Amy and Becky along with Chloe Williams. We wish them the best in France and look forward to another strong performance."