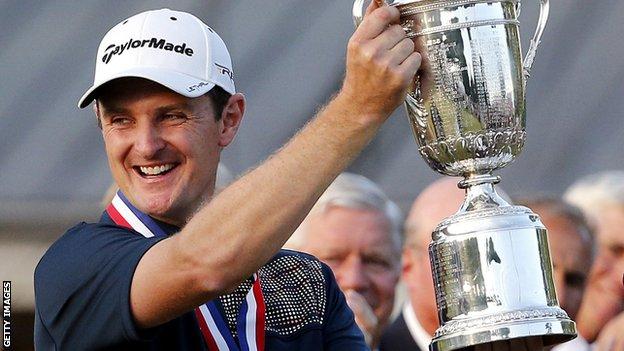 US Open champion Justin Rose can go on to claim multiple majors, according to the last Englishman to win the event.

Rose, 32, triumphed at Merion to emulate Tony Jacklin's success in 1970 and become the first English winner of any major since Nick Faldo in 1996.

"It's all about confidence and I've no reason to believe he couldn't win four or five majors," said Jacklin.

The 1969 Open champion paid tribute to the way Rose clinched his victory, finishing with two pars on the difficult final two holes to withstand a challenge from Phil Mickelson, who is now a six-time runner-up.

"He finished like a true champion," said Jacklin, speaking on BBC Radio 5 live.

"It takes a lot of courage to win a major championship. You have to stay in the moment, which sounds very easy but when the stakes are high it's very hard.

"To come through it is fantastic and I was proud of him. He's a good guy, he's good for the game.

"Merion was the great examination it's supposed to be - it was fantastic."

Jacklin added that Rose's success was a reward for his hard work since bursting onto the scene as a 17-year-old amateur when he finished in a tie for fourth in the 1998 Open at Royal Birkdale.

He went on to miss 21 consecutive cuts when he joined the paid ranks, before finally winning his first professional event in 2002.

"I was thrilled for him. I know what he's gone through in his professional life," said Jacklin.

"I was obviously around when he had that audacious chip in at Birkdale at 17 and witnessed the difficult time he had after turning pro and all the struggles that he had.

"To fight through that, it takes a lot of courage. What was shown at Merion was exactly that."

"Even though he has won his first major, he has won some big tournaments, he is a substantial player," he told BBC Radio 5 live.

"Obviously he has set his sights very high and that's what you have to do. That's what makes good players from ordinary players.

"He probably isn't thinking about being number one. He is probably focused on winning another major and you get to number one at doing so well at winning majors."