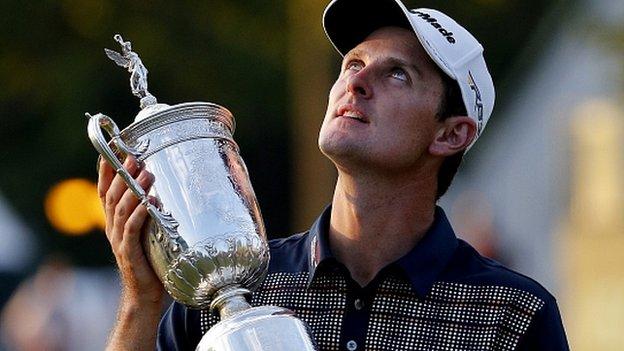 Justin Rose clinched his maiden major title to become the first Englishman for 43 years to win the US Open.

The 32-year-old won by two shots from now six-time runner-up Phil Mickelson and Jason Day on a gripping final day.

Rose, also the first Englishman to win a major since Nick Faldo in 1996, fired a level-par 70 to end one over as overnight leader Mickelson carded 74.

Australian Day took 71 as England's Luke Donald (75) collapsed to six over on the treacherous Merion course.

Rose led by one going up the difficult 18th and hit a stunning four-iron approach to set up a par four.

After tapping in his final putt, he looked up to the sky with tears in his eyes, and admitted later to thinking of his father and long-time mentor Ken, who died from leukaemia in 2002.

Mickelson, celebrating his 43rd birthday, needed to birdie the last to force an 18-hole play-off on Monday, but the four-time major champion could only make a bogey five.

"It wasn't lost on me that today was Father's Day," said Rose of his gesture when he was presented with the trophy on the 18th green.

"A lot of us come from great men and we have a responsibility to our children to show what a great man can be.

"For it to all just work out for me, on such an emotional day, I couldn't help but look up to the heavens and think that my old dad Ken had something do do with it."

Rose, who was born in Johannesburg but brought up in Hampshire, burst onto the wider scene as a 17-year-old amateur when he finished in a tie for fourth in the 1998 Open at Royal Birkdale.

He went on to miss 21 consecutive cuts when he joined the paid ranks, before winning his first professional event in 2002. His biggest victory to date was the WGC Cadillac Championship last March.

Rose's previous best major finish was tied-third in the US PGA behind Rory McIlroy last year, while he has had six other top-10s in majors.

He becomes the third UK winner of the title in four years after Northern Ireland's Rory McIlroy (2011) and Graeme McDowell (2010).

The last Englishman to lift the US Open was Tony Jacklin, who won by seven shots at Hazeltine, Minnesota, in 1970. Five other Englishmen won the US Open pre-war, while a host of Scotsmen won early editions of the event.

Rose first hit the front at the eighth hole as the lead changed hands countless times on a tumultuous final day.

Mickelson was seemingly finished after two double bogeys in his first five holes, but the mercurial home favourite holed his second shot for an eagle at the 10th to regain top spot and reignite his challenge.

The pair duelled down the notorious final stretch - with Hunter Mahan also sharing the lead at one point - but Mickelson was unable to avenge his Ryder Cup singles defeat by Rose last year and clinch a first US Open title.

Former world number one Donald, who played alongside Rose, fell away early with three straight bogeys from the third and then a double bogey on the sixth.

World number one Tiger Woods's challenge was already over before the final round and he ended 13 over after a 74, while second-ranked McIlroy took 76 for 14 over.

"I did a lot of things right. Unfortunately I did a few things wrong, as well," said Woods, chasing a 15th major title and first since 2008. "I struggled with the speed (of the greens) all week."