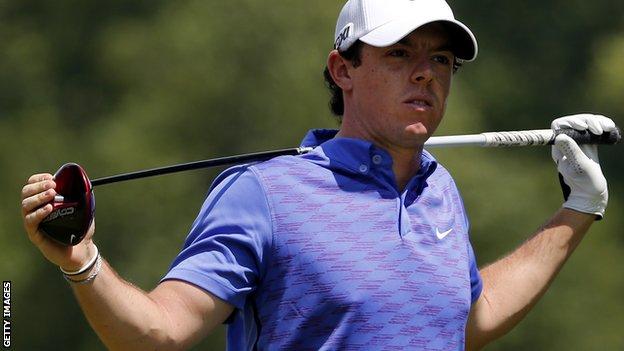 Rory McIlroy has conceded his hopes of a second US Open title have gone for this year after a five-over-par 75 in Saturday's third round at Merion.

The 2011 champion is nine shots behind Phil Mickelson and the world number two accepts the gap is too big.

"It would take something unbelievable and the scores aren't that low out there," McIlroy said.

"I guess, if I play well, and try to get into the top 10, that would be a realistic target."

Both then recorded seven bogeys in their rounds, although McIlroy did birdie the seventh.

"You get on the wrong side of the greens and it's just frightening because I didn't feel like I played too badly," added McIlroy.

"I was trying to get myself back into it, but it is tough.

"If you are just not 100% on top of your game, it is going to expose some of your flaws or weaknesses."

McIlroy had been just four shots off the pace going into the third round and that opening birdie gave him a heartening start to Saturday's challenge.

But the Northern Irishman pushed his tee shot out of bounds on the par-five second and dropped further shots at the third, fifth, sixth and ninth, with a birdie on the seventh seeing him out in 39 and six over for the tournament.

Ireland's three-times major winner, Padraig Harrington, is 10 shots behind leader Mickelson after a 75 on Saturday.